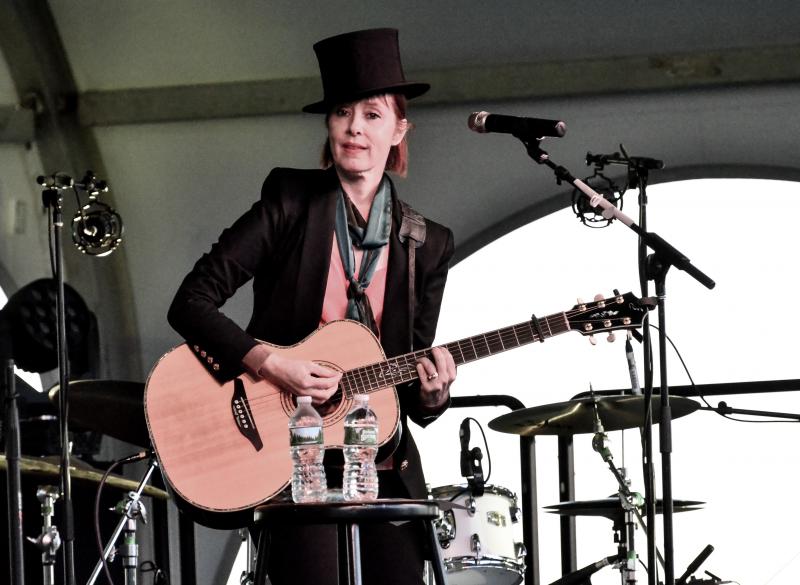 On a perfect fall evening, the hallowed and pristine grounds of the Sands Point Preserve Conservancy served as the picturesque backdrop for a delightful evening of music. Duncan Sheik and Suzanne Vega's Sunset Concert, the inaugural concert of its kind at this iconic venue located on the North Shore of Long Island, was anticipated by fans who settled in with picnic dinners and glasses of wine to enjoy a perfect pairing of artists. The beautiful Great Lawn served as a welcoming setting for the festivities.

Sheik, ever-dapper in a black t-shirt and gray jeans, took the stage while the sun was still elevated. The singer songwriter is the cultivator of a highly eclectic career in music, enjoying success in a variety of genres and means. His self-titled Atlantic Records CD hit shelves in 1996 and was certified Gold. Known for his early success with "Barely Breathing" which rode the Billboard Hot 100 charts for a record setting 55 weeks, Sheik has never been content to stay in one lane. His work in musical theater has produced stellar results, including his work with Steven Sater in creating the music for "Spring Awakening" which won a staggering 11 Tony Awards in 2006 including Best Musical and two for Sheik in Best Orchestrations and Best Original Score categories. His Covers 80s (MRI, 2011) takes on popular New Wave hits from The Cure, Tears for Fears and more. He revisited those in Covers 80s Remixed (MRI, 2012) and his latest work on Legerdemain (+180 Records, 2015) and American Psycho for the stage in London and Broadway have all been praised.

Guitar in hand, Sheik's set list featured a hearty amount of new work from his latest studio CD, Legerdemain, including the first two songs "Avalanche" and "Circling" as well as "Selling Out," "Half a Room" and "Distant Lovers." Doug Yowell aptly handled the drums and keyboardist Jason Hart rounded out the trio on stage. In fine spirits with his distinctive strong voice to match, he treated the crowd to "Don't Do Sadness/ Blue Wind" from Spring Awakening with some help from some Long Island University students on strings and Taylor Bass handling the female vocals. When he slightly flubbed the lyrics on "Barely Breathing," he laughed and started over. His final song was "This is Not an Exit" from American Psycho and the audience showed their appreciation with a healthy wave of applause. With that, Sheik's 9 song set ended, almost too quickly.

With the sunset in full bloom, Vega hit the stage, thanking Sands Point Preserve Conservancy for having her perform at the opening concert. "I look forward to being here for your 10th anniversary concert," she promised with a smile, guitar at the ready. The singer songwriter, known for her folk-inspired songs engaged the audience frequently, sharing stories about her selections for the evening.

A prolific recording artist, Vega started out playing in Greenwich Village as a student at Barnard College. In 1985, her self-titled A&M Records debut album came out and with that, a video for "Marlene on the Wall" which brought her to a wider audience thanks to the wonder of MTV. "Left of Center" which was co-written with Steve Addabbo for John Hughes 1986 film "Pretty in Pink" elevated her presence on the charts. Her ninth studio album Lover, Beloved: Songs from an Evening With Carson Mccullers (Perpetual Sounds, 2016) will be released this fall. The album, based on a play that she wrote with Duncan Sheik, contains 8 songs that she co-wrote with Sheik.

Guiarist and longtime collaborator Gerry Leonard joined Vega, as well as Yowell and Hart. Kicking off with "Fat Man and Dancing Girl," Vega soon donned a top hat for "Malene on the Wall" and her playful nature on stage was appreciated by the fans. "Crack in the Wall," "Jacob and the Angel," "I Never Wear White," and "Left of Center" were given lively renditions. From the new CD, Vega treated listeners to "The We of Me" and "Harper Lee." Rounding out the set with fan favorites "Luka" and "Tom's Diner," the crowd started to pack up their gear in the dark, making their way across the grass to the parking lot and out into the perfect autumn night. Additional article contributions: Mike Perciaccante