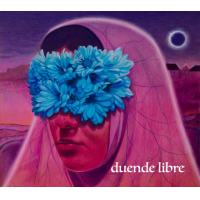 As world music proliferates into the mainstream, there are countless musicians attempting to capture its exotic rhythms and enticing melodies, some succeed, others falter. Taking their name from a Federico Garcia Lorca lecture on artistic inspiration and creation, Duende Libre's self-titled release manages to incorporate some of the essence of world music in what they term as global jazz fusion. The group's leader, composer and pianist is Alex Chadsey, accompanied by bassist Farko Dosumov, and drummer Jeff Busch. Moving to Seattle in search of stimulus and challenges, Chadsey fell into the Latin musical circuit and began to hone his playing and composing skills, eventually forming Duende Libre.

The repertoire covers a colorful palette of influences as the Veracruz inspired "Rio Pescadores," which has a Caribbean connotation accented by the mid-section piano montuno. Vocalist Chava Mirel adds her swaying chanting to "Forgotten Well," that has a touch of flamenco coplas in its mysterious cadence. Named after the famous city in Spain, "Sevilla" draws from classical as well as folkoric sources, Chadsey and Dosumov cleverly weaving these two threads into fine soloing. "Michel," and "Razzle Dazzle," catches Chadsey switching to electric piano for an urbane sound, which goes full funk mode in "Funkination."

As with any calculated arrangement, it's on the tempered ballads as "Moon Walk," that one can appreciate the approach to refinement and technique. Written in honor of African music legend Salif Keita, the relaxing "Salif," continues the laid back ambiance. They travel to the edge of Jamaican dancehall on "Still," which exhibits a strong shade of Santana in its assertive organ lines, and wrap it up with "Sinister Minister," an upbeat carnival revelry defined by sharp cowbell accents from drummer Busch, and aggressive bass lines.

Duende Libre is an exciting debut record that displays a multi-faceted band willing to take chances and allow the music to take them where it will. What sets them apart from studio session players, is that they perform with a zest that comes from their cross-cultural associations. World music is street music, and it's that element that sparks life into this release.