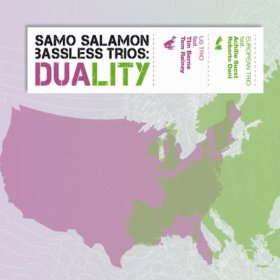 Guitarist Samo Salamon is one of those players quietly but fully engaged with moving the music forward. His vocabulary is entirely his own by dint of the individuality of phrasing that pervades the music of both trios featured in this set.

Despite the similarity of instrumentation, the two groups' different personalities is testament to what's going down. The US trio, with alto saxophonist Tim Berne and drummer Tom Rainey, flirts with the kind of music Ornette Coleman was producing with The primeTime sublime Community Orchestra, albeit with a greater measure of reflection and less febrile energy. "Mea Culpa," in particular, is marked by both restraint and a feeling that at any moment the proceedings might not only erupt but will become something completely different. The duo passage played by Salamon and Rainey highlights this in no small part, but when Berne comes back in he takes the music in another direction.

On the aptly titled "Twists and Turns," Salamon and Berne played the head in unison and, whilst it's a knotty thing indeed, the rhythmic vitality and absence of a bassist combine to give the music a restlessly inquiring stamp.

The trio with reed player Achille Succi and drummer Roberto Dani is powered by a different source of energy, resulting in dynamic variation of no small order. This is notable on "Roofs in the City," where the leader's input gives the music momentum counterbalanced by Succi's reflections. Again, the overall effect is of music involving no little risk-taking, a quality which is always welcome. Both of these groups are appreciative of it, too, ensuring that their music both intrigues and delights, rewarding repeated listening every time.