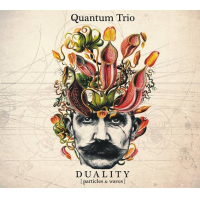 As anyone who's ever read or watched science fiction can tell you, there are any number of universes that occupy states different from our own. Limitless possibilities are created by the chances of things happening one way or another. There could be another Earth out there that's secretly run by penguins, one where Miles Davis actually got to make that planned album with Jimi Hendrix, or who knows, maybe even one where public opinions on Ornette Coleman and late-period John Coltrane are near-unanimous.

The Quantum Trio may be locked into this current reality with us as far as we know, but their fascination with parallels doesn't have to be. From the format of two complementary discs to the pieces based around scientific concepts, their second album Duality: Particles & Waves continues relentlessly expanding the band's scope with zest and imagination. It's a portrait of a universe that largely values order but isn't immune to the odd chaotic freakout.

"Particles" begins illustrating the quantum concept right away with Kamil Zawiślak seesawing between two piano chords. He makes a base for Michał Jan Ciesielsk's saxophone to restlessly careen around the room, and suddenly they're off on a floating groove that's both steady and impossible to pin down. The trio's subtly precise interplay continues resonating in similar fashion throughout the first disc. "Eigenstates" features a pair of dual horn parts weaving around each other in harmonic flux, while the slow-coasting "Branes" continually mutates a repeating line by shifting one note in each iteration. It's only a little jarring when the outlier "Here, There, Everywhere?" ends the Particles section with some gentle crooning; even if the smooth vocal part is the album's most obviously conventional moment, the words still help reinforce the overall theme.

The Waves disc starts out with some electric piano to signify that it'll have a little more juice than the all-acoustic front half. There isn't a terribly drastic change here, but they judiciously weave a few more fuzzy keyboards and echo effects to further establish the two sides as counterparts. Luis Mora Matus steps more into the lead on drums here as his restless clattering kicks the overall energy up another notch. This section appropriately boasts the most straightforward hitters of the set, particularly in the driving back-and-forth of "Light Years" and the steady build through "Photons" that closes things out by flying into space.

Most importantly, for all its trickery, Duality remains as appealing as it is brainy. Those who don't want to pick apart the compositional quirks can simply enjoy the sound of three imaginative players refusing to stay static. The leap they take here is an ambitious success, playfully reflecting a range of intriguing possibilities, then collapsing them into something both challenging and fun.