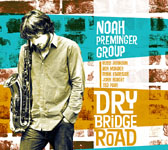 Joined by Russ Johnson (trumpet), Ben Monder (guitar), Frank Kimbrough (piano), John Hebert (bass) and Ted Poor (drums), Preminger leads a top-drawer crew through a program of inventive originals and choice cover tunes that range from understated ballads to raucous free improvisations. As a testament to his nascent abilities, Preminger easily holds his own in the company of seasoned veterans.

A nuanced stylist with a breathy, supple tone, Preminger's tender elucidations on the brief tone poem "A Dream" and the languorous "Where Seagulls Fly" are heartfelt expressions of surprising maturity. Dave Douglas' "Blues for Steve Lacy" is given a similarly lyrical performance, with soulful contributions from Preminger and company. The variable dynamics of "Luke" inspire Preminger's impressionistic side, with harmonious contributions from Ben Monder and Frank Kimbrough, whose effervescent pianism enriches "Where Seagulls Fly."

Preminger's aesthetic scope embraces an expansive dynamic range, demonstrated by his fleet-fingered bop runs on "Today is Okay" and Lee Konitz's "Sax of a Kind." Preminger and Johnson coil interweaving lines through a maze of shifting tempos on the former tune, with the leader's vibrant circuitous solo flight followed by a climactic series of thematic variations from Johnson. The Konitz tune proves Preminger has done his homework, as he and Monder careen through the changes with quicksilver aplomb.

Supported by an elastic rhythm section and vibrant contributions from his front-line partners, the album's final three tunes feature Preminger's most adventurous playing. The oblique angles of "Was It a Rat I Saw?" escalate into a frenetic duel between the leader's gruff tenor and Monder's fuzz-toned guitar. "Real Nice" offers a masterful blend of inside/outside dynamics, as a silver-toned melody wafts through an atmospheric, elliptical groove that builds in waves of epic, Coltrane-like fervor from Preminger and Johnson. The album closes on the rousing "Rhythm for Robert," as Johnson delivers a passionate, Spanish-tinged performance over a dark, loping rhythm before the tune shifts gears and Monder metes out scorching sustain to an abstracted rock pulse.

History is full of debut records by young jazz musicians who drift into obscurity. Although Dry Bridge Road initially starts off deceptively low-key, it reveals great promise as it progresses, ending on a high note. A young artist with great potential, you'll likely hear more about Noah Preminger in the future.