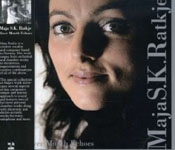 Multidisciplinary electro-acoustic composer/vocalist Maja Solveig Kjelstyrup Ratkje has, over the course of the past decade, built a significant reputation in her home country of Norway as an intrepid artist for whom few, if any, boundaries exist. No small achievement in a country filled with artists for whom nothing is forbidden and anything is possible. Known to fans of accordionist Frode Haltli—singing and composing on his resonant yet challenging Passing Images (ECM, 2007) as well as composing the centerpiece to his more classical-leaning Looking on Darkness (ECM, 2002)—and a founding member of Rune Grammofon recording group Spunk, whose all-improvised performance at FIMAV 2008 was one of its highlights, Ratkje has managed to evade similar éclat in North America.

Until now. River Mouth Echoes, Ratkje's North American debut, provides a compelling and demanding cross-section of writing from 1997 through 2005, in contexts ranging from voice and synthesizer to works for small orchestra, an unconventional string quartet of four violas da gamba, two pieces for saxophone and processing, and a trio comprising accordion, saxophone and double-bass. Any one of Ratkje's many areas of interest would be impressive enough; the breadth that she demonstrates here is all the more remarkable for her still being on the shy side of 35.

"Wintergarden," for voice and synthesizer, may not be the album's most ambitious work—that would have to be the 20-minute title track for four violas da gamba and the shorter, but even more expansive "Waves IIB," performed by the Oslo Sinfonietta. But over its six minutes, Ratkje layers countless voices that travel from rich harmonies to guttural utterances; sung melodies to gentle spoken word; and percussive articulations to squeals so high that only canines may be able to hear them. An entirely different vocalist from fellow Norwegian Sidsel Endresen, Ratkje does, however, bear some comparison with respect to her unfettered experimentation with the fullest possible potential of the human voice, something Endresen herself consolidated recently on One (Sofa, 2007).

Two pieces for saxophone and processing bookend the album. While "Øx" finds Ratkje's reshaping of Rolf-Erik Nystrøm's alto so extreme that it's rare to discern the instrument, on "Sinus Seduction (Moods Two)" Torben Snekkestad's tenor is more tangible. Still, the radical sonic manipulation creates, in both cases, a strange, otherworldly landscape of varying dynamics and textural shapes.

Improvisation is an unmistakable component of River Mouth Echoes' smaller ensemble pieces, though it's more in the realm of reference points that lean towards 20th Century and beyond classical composers. Chaos and calm juxtapose but, even more uncannily, coexist. Clear melodies and dissonant densities find curiously engaging nexus points. Above all, Ratkje not only finds ways to bring together diametrically opposed concepts such as clean lines and gross distortion, but also oftentimes finds unexpected beauty hidden beneath.

For those familiar with Ratkje, River Mouth Echoes is a fine consolidation; for those new to this courageous young explorer it's a thrilling introduction to an artist whose importance is just beginning to be felt.