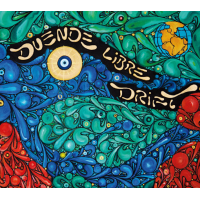 Duende Libre is an energetic trio of Seattle musicians utilizing the American jazz tradition as a jumping off point for exploration of global musical forms. The creative vision for the band is perhaps that of pianist/composer Alex Chadsey, yet it is his two mates, drummer/percussionist Jeff Bush, and uber bassist Farko Dosumov that bring his musical vision to life.

Chadsey sets the bar high for this band by including the term "duende" as part of its moniker. While the term has ancient cultural roots, Spanish author Federico Garcia Lorca provided modern insight into the phenomena in the early twentieth century. Lorca stated, "The duende, then, is a power, not a work. It is a struggle, not a thought," adding, "the duende's arrival always means a radical change in forms. It brings to old planes unknown feelings of freshness, with the quality of something newly created, like a miracle, and it produces an almost religious enthusiasm."

While all arts are capable of duende, it is most commonly found in music, dance, and spoken poetry. It is most applicable to arts that require a living body to interpret them, being forms that are born, die, and open their contours against an exact present. It represents the height of an artist's magical prowess. In the jazz world, one can assess that Miles and Trane had duende. So yes, Chadsey has set the bar high, absolved from any notion of limitation, or cultural separation.

The band's premise also explores jazz music, the quintessential American art form, as a creative platform that unites with other cultural flows in continuous motion, defying political boundaries rooted in struggle. Drummer Busch best personifies that notion, having traveled the world extensively in exploration mode, seeking to add world rhythmic variance to his vocabulary and master the instruments that speak those musical dialects. Add a generational talent in electric bassist Dosumov, and Chadsey has some tools in his toolbox to etch out the framework of the collective he envisions, elevating the duende of his music into a mysterious power which everyone senses and no philosopher explains. That is duende, and as mentioned, a lofty, if not unattainable standard for an artist, much less this trio.

On the band's second release, Drift, the energetic trio attempts to recreate its stellar reputation as live performers. Indeed, while unadorned by guest artists, the trio can work some magic into live performance. There are a few tracks on this record that notably reflect that ardent live sensibility in the studio.

The album finale, "Bosphorus," is representative of the energy and focus of a live performance by this eclectic trio. Chadsey's piano solo on the piece is the album's best example of pure jazz expressionism, conjuring sentimental images of joy and trepidation. Dosumov's virtuosity is accompanied by his deep understanding of flamenco form and rhythm in a resounding resolution to the tune. His soloing on this tune, and the entirety of the album, brings to light a well-trained musician in a myriad of musical forms who is not constricted by his knowledge or training. At some point in time, his boundless talents will no doubt be celebrated appropriately, as he is simply a marvelous player.

On the title track, Chadsey bounces back and forth between piano and electric keyboard, offering perhaps the strongest composition on the album in terms of melody. There is a very Chick Corea type of feel to Chadsey's prowess as both a player and composer on this piece. Busch creates a foundational rhythmic sense that truly opens the door for Chadsey to create a beautiful melody, and expound on it with a riveting piano solo.

While one may allude to Chadsey's prodigious talents to being "Corea-like," it is somewhat trite and unimaginative that he decided to include a well performed, but ordinary version of Corea's signature offering, "Spain" on this record. While it is difficult enough for Chadsey himself to elevate his own game to that of Corea, vocalist Chava Mirel is put in the unenviable position of channeling Flora Purim and her brilliance as a voice instrumentalist. All said, this is one track that easily could have been left out of the final cut.

The Chadsey compositions "Choro," and "Kiki" return the listener to the conceptual intrigue of Duende Libre. The Brazilian choro form is an improvisational form that literally translates to "lament," or "cry." The melody refers to that tradition, and accentuates that theme with brilliant soloing from Dosumov and Chadsey. "Kiki" comes off as the most organic piece on the album, again featuring a melody enhanced with syncopated counterpoint. Both tunes are emblematic of what one would expect from a live DL performance.

Dosumov's single contribution is the rollicking funk anthem, "Subway." Dosumov benefited from the amazing support for the arts afforded by his native Soviet Union, becoming a very well trained, well-rounded musician. More notable, however, is how he has utilized that training. Dosumov might be described as a once-in-a-generation type of talent, playing in relative obscurity in Seattle. Unfortunately, his brilliance on this tune is interrupted by overproduced tracked choral vocal harmonies that seem out of place within this funk groove. Solos by Dosumov and Busch return this composition to form and intensity.

What will continue to entice multiple listens of this album is the band's ability to explore multiple cultural forms without being constrained by them. They use danceable rhythms without falling into the irrelevance of dance music. There is something there for the body to dance to, with enough tangible instrumental virtuosity to entertainment even my most esoteric musical leanings. Whether that translates into the rarefied air of "the duende" is for the listener to decide. Duende allows a musicians to see through the ordinary, and helps them create and communicate memorable, enlightened art.

When this trio figures out how to shed the shackles that can be applied by a lack of label distribution, overproduction, and musical identity crisis, it may prove capable of issuing a musical statement worthy of its mythical and perhaps unreachable standard expressed by its moniker. Duende is not a variable as seen through the lens of individual conception or impression. It simply is. This band does not lack the two main ingredients in creating magical art-talent and courage. The three members of the trio are distinct in their talents, inspirations, and musical aspirations. In Drift, they have created an entertaining album that at times falls into artistic profundity.