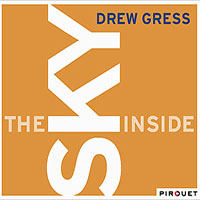 Bassist Drew Gress returns with the same quintet with whom he's been recording since 2005's 7 Black Butterflies (Premonition). Don't fix it if it ain't broke, they say, and if, with the addition of trumpeter Ralph Alessi to the core quartet that also recorded 2001's Spin & Drift (Premonition (and with Craig Taborn replacing original pianist Uri Caine), then 7 Black Butterflies' followup, The Irrational Numbers (Premonition, 2007), made even clearer that the ubiquitous bassist—who counts guitarist John Abercrombie, pianist Marc Copland, drummer John Hollenbeck's longstanding Claudia Quintet and saxophonist/bass clarinetist John Surman amongst his many working credits—had found exactly the right lineup to interpret his oftentimes knotty, sometimes oblique but inevitably intriguing compositions. The Sky Inside may represent a label shift to Germany's Pirouet Records, but other than that, everything else has remained intact, including recording the album at the same studio, Brooklyn's Systems Two, where engineer Jon Rosenberg also committed 7 Black Butterflies to tape, hard disc or whatever media was de rigueur at the time.

If anything, Gress' quintet—which also capitalized, at inception, on the preexisting chemistry of saxophonist Tim Berne's Hard Cell trio, with pianist Craig Taborn and drummer Tom Rainey—has evolved even further, even as the bassist's writing has moved to a position even further left-of-center than his past three recordings. There seems to be something in the water in New York City these days, with Taborn's stellar trio date, Chants (ECM, 2013), Berne preparing his follow-up to the similarly career-defining Snake Oil (ECM, 2012), and Alessi's leader debut for ECM due later this year, Baida—which, in addition to pianist Jason Moran and drummer Nasheet Waits, also includes Gress' participation. Rainey aside, Gress may be the only one of this leader-filled quintet not to be recording for the German label of more than 40 years' renown, but in many ways, when compared to his colleagues' recordings, The Sky Inside would certainly fit within that label's vision and aesthetic.

Still, in just a few short years, Pirouet has emerged as a label of significance, and a worthy new home for Gress. Gress' writing ranges from the irregularly metered opener, "No Saint," a contrapuntal piece where Berne and Alessi layer long-held tones of a slowly evolving and intensifying melody before gradually opening up for what begins as a saxophone solo but slowly, inevitably turns into an improvisational free-for-all, with only Rainey keeping a semblance of pulse—though with Alessi's growling tone and Taborn's combination of chordal dissonance and angular arpeggiations, it's a tough one to find. Even less jagged tunes like the balladic "In Streamline" are somehow skewed, their lyrical underpinnings clear but, at the same time, far from straightforward.

But it's the nearly 12-minute title track that reflects The Sky Inside's biggest shift, even if it's a relatively subtle one. "The Sky Inside" also incorporates subtle electronics, courtesy of Gress, making for a compelling combination of freedom and form that, beyond the tremendous interaction between Berne and Alessi—sometimes pushing away from each other like the same poles of a magnet, other times joining in near-unison—their microtonally conjoined and ultimately more consonant harmonies leading to a paradoxically richer yet even sparer middle section, first predicated on Gress' descending bass pattern and then more ethereal passages of otherworldly beauty. Greater drama unfolds with Taborn's sudden firm, lower register left-hand, only to dissolve into complete and utter spontaneity—at least, until Gress' ostinato, Rainey's pulse and a repetitive three-line melody from the horns bolsters Taborn's most thrilling improvisational passage of this 72-minute set.

There's plenty more, but what The Sky Inside reflects as a whole is Gress' increasing confidence as a writer, imbuing his long-held jazz acumen with new music references from beyond its widest purview, and as rallying point for a group of players—every one of them an established leader in his own right, with unmistakably strong personal identity—who may often work together in varying constellations, yet still manage to provide The Sky Inside with its own inimitable voice.