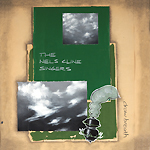 Cline has been the subject of an unprecedented amount of press for an avant-garde musician, courtesy of his recent stint as lead guitarist for Wilco and his designation as a "Guitar God" by Rolling Stone Magazine. Deserving of the hype, Cline is one of the most versatile and essential guitarists working today, irrespective of genre or style.

Opening with the somber, down-tempo "Caved-In Heart Blues," the trio proves it can work with subtlety and grace as easily as volume and histrionics. Investigating traditional concepts of melody and harmony, "The Angel of Angels" rides a simmering waltz, brimming with bittersweet Americana. Exceedingly lyrical, it shares similarities with the bucolic pair "Recognize I and "Recognize II," both introspective acoustic musings.

The majority of the album however, revels in punk rock intensity by knitting progressive jazz structures to raucous free improvisation.

The epic centerpiece, "Evening At Pops'," steadily ascends from an abstract quilt of shimmering electronic texture and fitful agitation to the trio's heaviest playing on record as Cline churns out a sludge metal riff that sounds like an out-take from a Melvins record.

Rivaling Cline's beloved 1990s trio (with bassist Bob Mair and drummer Michael Preussner), Draw Breath reveals The Nels Cline Singers to be his most versatile and impressive ensemble to date.