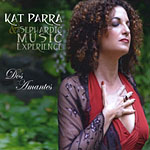 It was called Al-Andalus from about 711 AD until it succumbed to the rule of the Portuguese in 1492 AD. But in between that period the Iberian Peninsula that includes Andalusia, Granada, and Castile—modern Spain—was ruled by several Moslem Dynasties of Moorish (North African) origin. They created a legendary culture of inclusion allowing several faiths to live in harmony. This bred a near-fabled culture in which the Sephardic Jewish culture also flourished. Gathering artistic riches over thousands of years this Diaspora fused elements of Africa, the Middle East, and the Latin elements of Europe into a miasma of glorious poetry and music that has evolved in a vocabulary in Ladino, over 14 Centuries and counting. This is what burns in the quiet fire of Dos Amantes, a remarkable album from the ravishing-voiced vocalist, Kat Parra.

Singing in a dialect that is softened by the mash of Spanish, Arabic, Hebrew, and some Latin, the music is defined by dramatic highs and lows as it ululates like animated ocean swells. Parra follows this with aplomb as she flies upward with thrilling, bell-like clarity only to plunge into the tenors of ponderous lows examining the dark feelings of loss and sorrow. Her control is admirable in musical dialect that makes superhuman demands on the vocal chords to act dramatically, as they inhabit characters that experience a gamut of feelings and emotions. She has a wonderful partner in Murray Low, who arranges and directs music where it appears no effort has been spared to reflect authenticity.

This experience infuses the glorious music of "Dos Amantes," a song that brings to life the joy and pain—and joy again—of two lovers as it follows them on a magical journey into their affair. It surfaces in a dramatic swell again on "Una Matika de Ruda," a song that dallies in minor modes as it describes a daughter discovered to have broken the confidence of her family by taking on a lover, forbidden in her culture. What sets this song apart is the gorgeous interpretation of the music by the percussion that sets Katja Cooper's timbales against the melodic Indian tabla of Ravi Gutala. But these songs are relatively easy to appreciate as they come drenched from deep within the Sephardic experience. The other tracks are even more memorable.

"Los Bilbilicos," designed as a wonderful, Spanish "Habanera," that superlative, formal dance that touches the heart-strings as the characters of the song dance lyrically around each other. A quiet fire burns through the flamenco rhythms of "En La Mar," a song that describes the roar of the sea in harness. And so on, as the album wends its way rhythmically through ballads, Afro-Cuban, Afro-Caribbean, and North African rhythms. Always, of course, the players weave in the Sephardic Music that sways and pitches gently in fluttering winds that blow it gently and spiritedly through the musicians that accompany Parra on her remarkable and unforgettable musical journey.