Donny Hathaway: Celebrating the Spirit and the Soul

Enormous praise for Hathaway's debut emerged from various corners of the music world. Congratulatory remarks came from Ray Charles, Aretha Franklin, Carole King, among others. To launch the talented musician into superstardom, Atlantic determined his next release would be a more pop-oriented record. Not even a year after Everything is Everything appeared in record stores, Atlantic Records released Donny Hathaway's eponymous second album on April 2, 1971. It was not particularly successful so far as sales; however two songs received critical and popular praise: "Giving Up and Leon Ware's "A Song For You. Identifying "Giving Up as the "benchmark in the art of forthright emotional vocal communications, Atlantic Records executive Jerry Wexler praised the emotive ballad as "one of the two or three greatest productions in Atlantic's long history, worthy of placement alongside Ray's "What'd I Say and Aretha's "Respect. Continuing his praise of the masterpiece, Wexler noted: "Most songs are lucky to have a single climax, but "Giving Up has at least four; Hathaway's arrangements builds to peak after peak, King Curtis's bone-chilling tenor break lifting the spirits to ever greater elevations. It's just a stone masterpiece. Fans may have appreciated "Giving Up and "A Song for You, but tepid best describes their response to his eponymous album. A few critics dismissed the album as unfocused. Turned off by what he viewed as Hathaway's pretentious approach to music, the noted music critic Robert Christgau gave the album a "D- . Said the dismissive Christgau in his terse review: "Jerry Wexler and Atlantic, who would seem to know more about this sort of thing than I do, are pushing this refugee from the production booth as the Man Who Will Revitalize Soul Music. Could be, as I say, but if having soul means digging on all this supper-club melodrama and homogenized jazz then I'm content to be sterile, square, and white. Yeah yeah yeah. Such commentary seems unduly harsh; however, one could understand some folks' disappointment with the album. Quite simply, the Donny Hathaway album was not as musically, aesthetically, and socially progressive as his debut or the soul masterpieces released in 71: Marvin Gaye's What's Going On, Sly and the Family Stone's There's A Riot Going On,, Funkadelic's Maggot Brain, and Aretha Franklin's Young, Gifted and Black. Still, there were some solid moments on the album. Such moments, unfortunately, didn't translate into pop superstardom. Climbing to number six on Billboard Magazine's Top Soul Albums list, Donny Hathaway failed to move beyond #89 on the Pop Charts.

Executives may have been disappointed with Hathaway's sales, but they had to be appreciative of the part he played in the success of one of the company's more successful releases of 1971: Aretha' Franklin's Young, Gifted, and Black. Significantly influencing the album's mature sound was Donny Hathaway, whose understated organ shaped the rhythm section's sound on six of the album's cuts. No doubt, Hathaway's standout performance is on the airy track, "Daydreaming, which opens with the ethereal sounds of his electric piano. Hathaway's piano flourishes contrasts beautifully with the muscular sound of Bernard Purdie's killer drumming. Fully cognizant of Hathaway's critical role in her album's success, Aretha Franklin praised the soul legend in her autobiography, From These Roots. "Donny, Franklin explained, "was multimusical the way some folks are multilingual. He was a young master and a soul artist of tremendous talent.

Talented indeed, Hathaway continued to amaze his peers as he busied himself with numerous musical projects during the hectic year of 1972. Few projects would be more ambitious than the soundtrack, Comeback Charleston Blue, which he wrote, recorded, produced, and arranged under the supervision of Quincy Jones. Showcasing his jazz chops as a pianist and composer, Hathaway drew on the musical legacy of Duke Ellington and Count Basie. An underappreciated work seldom discussed by even Hathaway enthusiasts, Comeback Charleston Blue featured a richly textured sound, which incorporated expansive string orchestrations, disjointed jazz rhythms, and his incredibly lush vocals. A listen to "Tim's High" and "Liberation, reveals the extent to which Hathaway understood the power of moods and atmospheres. Clearly Hathaway also had a firm grasp of clasical music. Several songs on Comeback Charleston reveal Hathaway's deep admiration for the compositional style of the French composers commonly referred to as Les Six. An ambitious musician whose expansive mind refused to content itself with familiarity with only one musical tradition, Hathaway had begun to immerse himself in the work of Georges Auric, Louis Durey, Arthur Honegger, Darius Milhaud, Francis Poulenc, and German Tailleferre. Such exploration continued on his next studio project. 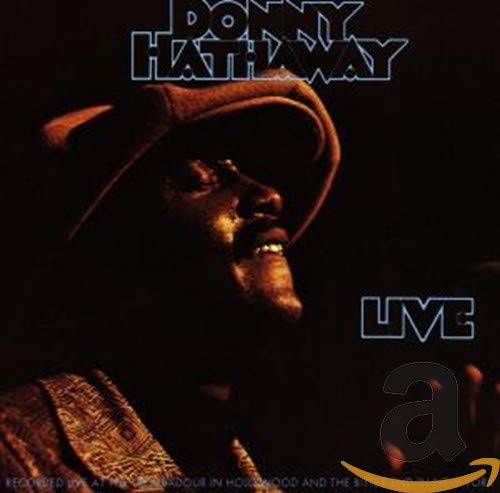 Staying busy in 1972, Hathaway also recorded his highly acclaimed, live album, Donny Live, which garnered the crooner his first and only gold record. A hallmark of the soul period was the release of several amazing live records: Aretha Franklin's Amazing Grace and Live at the Filmore, James Brown's Love and Peace, and Curtis Mayfield's Curtis Live. Few were more impressive than Hathaway's Live. Standouts on the live release include his soulful rendition of Johh Lennon's "Jealous Guy, an equally impressive cover of Marvin Gaye's "What's Goin' On, "The Ghetto, "Little Ghetto Boy, and "Voices Inside (Everything is Everything) . Listening to the audience's passionate response during the recording enables one to better appreciate soul musicians' unique relationship to their audience. No doubt, Hathaway's live recording possessed the emotional fervor of a down home, church revival. Enormously encouraging, the energetic crowds at New York's Bitter End and LA's Troubadour responded enthusiastically to Hathaway's every moan, groan, piano lick, and chord change. Certainly at his improvisational best in live settings, Hathaway drew from the talents of his superb band (which included such skilled musicians as Cornell Dupree, Willie Weeks, Earl DeRouen, Richard Tee, Phil Upchurch, Mike Howard, and Fred White) and the enthusiasm of his audience. Truly an amazing recording, Hathaway's live album moved five hundred thousand units in less than six months. It was his first and only gold certification as an artist.

Celebration was in order not only for his gold certification, but also for the success of his album with his colleague from Howard University, Roberta Flack. Roberta Flack and Donny Hathaway climbed to number two on the Black Albums Chart and number three on the Pop Charts. "Where Is the Love received enormous play on soul, jazz, and pop stations across the country. 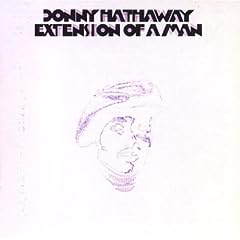 Such commercial success eluded Hathaway's next solo project, Extension of a Man .Viewed by some as his most ambitious recording, Extension of a Man was released on June 18, 1973. Opening with the six-minute orchestral piece, "I Love The Lord He Heard My Cry, Pts. 1 & 2 , Hathaway's third album demonstrated his talents as a composer, romantic crooner, band leader, and pianist. The album's impressive opener compares favorably to the tomes/suites on one rather popular jazz record of the time, Archie Shepp's 1972 release, The Cry of My People. It was an effort to provide a compositive portrait of the various sounds and genres of Afro-American music, something various artists in jazz were also attempting. Extension of a Man was more of an artistic than commercial success. However, two of the album's tunes, the Motown-influenced "Love, Love, Love and the bluesy "I Love You More Than You Know cracked the Top Twenty. To dismiss the album as unsuccessful underestimates its impact on many in the black community. A moving song covered by two amazingly talented jazz artists, Kenny Garrett and Charlie Hunter, "Someday We'll All Be Free, resonated deeply with black women and men who found political, economic, and social freedom still elusive during the turbulent seventies. Smooth jazz fans may be familiar with another tune off the album, "Valdez in the Country , performed by George Benson on his In Flight release. "Valdez in the Country had been recorded a year earlier by the San Francisco-based, white rock group, Cold Blood, whose debut album First Taste of Sin on Reprise records had been produced by Hathaway.

Sadly, the years following Extension proved difficult for Hathaway, personally and artistically. Severe bouts with depression limited his artistic input tremendously, even though the singer remained under contract with Atlantic Records. Four years after the release of Extension, however, Donny surfaced on Roberta Flack's Blue Lights in the Basement. A Quiet Storm staple penned by Reggie Lucas and James Mtume, former members of Miles Davis' fusion band, Hathaway and Flack's duet, "The Closer I Get to You achieved gold status and reached number one and number two on the rhythm and blues and pop charts respectively. Unfortunately for those who envisioned even greater commercial acclaim for the gifted young man, Hathaway's life came to a tragic end on January 13, 1979 in New York. Only hours after Hathaway completed a recording session with Flack, his body was found outside the posh Essex House Hotel. Weeks later, New York medical examiner John S. Pearl ruled his death a suicide, but the singer's family and friends claimed vehemently that his death was accidental rather than intentional. "He was extremely positive, producer Arif Mardin remembered, "He was not depressed at all. He was in perfect spirits.

Speaking before one thousand mourners in attendance at Hathaway's funeral at Missionary Baptist church in St. Louis, the Reverend Jesse Jackson focused on the singer's musical legacy rather than the circumstances surrounding his unfortunate death. "How Hathaway died, Jackson informed the crowd, "cannot consume our time, but rather how he lived and what he contributed. "His legacy, Jackson continued, "is music. Veteran record producer Jerry Wexler echoed markedly similar sentiments years later in his autobiography, Rhythm and the Blues: A Life in American Music: "I loved Donny and continue to derive sustenance from his records. When he died he was only thirty-three, and already being called a giant; I often think of what he might have accomplished. His talent had no limits. The beauty of his voice and the sweetness of his soul remain a permanent part of the liturgy.

A testament to Hathaway's amazing talent, many of today's musicians have drawn from his legacy, his songbook, his vocal approach, and his emotional fervor. Such diverse artists as Beck, Pharrell Williams, Common, Frank McComb, and Raul Midon have acknowledged their indebtedness to his artistic work and spirit. Of course, his influence permeates the work of his incredibly talented daughter Lalah Hathaway, whose beautiful tone, impeccable phrasing, and brilliant sense of timing has received praise from her loyal fan base and music critics. Very much like her father, she's refused to limit herself to one particular genre or stylistic approach.

Nearly thirty years have passed since Hathaway's death, but his music continues to teach us the power of art, the benefits of improvisation, and the lessons to be learned from crossing artificially created genre boundaries. Sadly, the unfortunate circumstances surrounding Hathaway's death has colored the ways in which we not only talk about his life, but analyze his music. Too often his music is portrayed as invariably sad, melancholic, or dreary. Frequently ignored in discussions on Hathaway's music was his profound sense of humor, his love for his people, and his faith in humanity. His willingness to explore the variety of human emotions coupled with his incredible talent as a singer, pianist, and arranger distinguished him as one of the most innovative yet underappreciated artists of the 1970s.