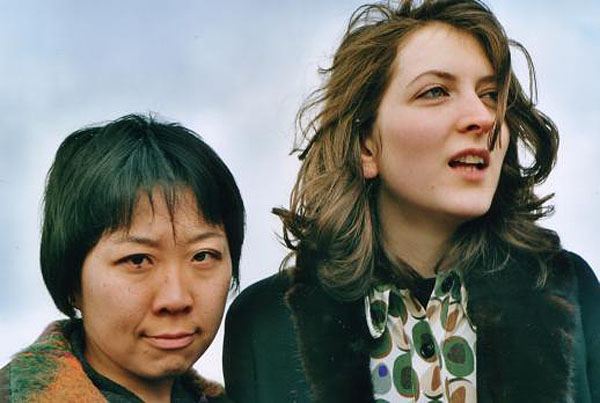 BY ANTHONY SHAW
February 26, 2011
Sign in to view read count
Donkey Monkey
Kanneltalo
Helsinki Finland
February 16, 2011
Whenever an unorthodox lineup takes the stage, listeners are easily distracted from a show's musical content. A frozen winter night's performance in a suburb of Helsinki, Finland may not be the most objective situation to assess the intriguing cross-cultural Donkey Monkey, but the impressions of drama and delicacy that this French-Japanese duo left were as much the result of musical as of cultural innovations.
Their music stepped a delicate line between the simple and the surreal. Stage left was the enormous shiny black Steinway, and perched on the edge of the seat Eve Risser, her starchy crinoline stage costume and bouffant hair the very image of Alice in Wonderland. The music, tumbling and trickling from her piano, was equally bizarre—not least, when she surrendered her piano stool and leaned into the open piano body to play with brushes, stones and, probably, a guitarist's E-bow. These were the moments when drummer Yuko Oshima, in her cut-back black trouser suit, was not bursting around her kit playing strenuous runs and riffs, but waving brushes over skins and conjuring percussion from ephemera.
The meeting of distant musical heritages was overt at times, such as Risser's reflective "Blues Nippon" or Oshima's electronic "Wonky Monkey Boogie." Both artists were very much their own women, both delving into their different resources. But it' clear, from the cover of Hanakana (Umlaut Records, 2011)---as they pose among assorted manga bric-a-brac, dressed in traditional Japanese wrappings—that their meeting of cultures is more than coincidental. With the addition of their warbly soprano duets, sung in absurdly cheeky French accents on songs like Carla Bley's Can't Get My Motor to Start, they also provided light relief to the intricacy of the many extended improvisations.

The women were, at once, the antithesis of each other in decor and demeaor, but remained musically intricately intertwined. Many pieces included theatrical tension and crescendo, where Risser's left hand-led counter-rhythms were met and matched by Oshima's powerful, fiery licks. It shouldn't be surprising how raucous these two ladies can be, given the extremities of some of their other projects, and if there was a little frisson at the edges of their show, it may have been because Helsinki was the last leg of a Baltic tour that had taken in two other capitals and five countries over the previous seven days. But the unity of their absorption and understanding meant that any disjunction was easily outweighed by symmetry. Whether Risser's piano pounded or purred, a delicateness of sound still predominated.

On this wintery evening, the duo's musical envelope was being pushed to remote corners, very distant there from attested influences such as Stockhausen and Kumi-daiko drums. More often, it became a magic carpet, bearing listeners on a helter-skelter ride into their creators' subconscious. Donkey Monkey guides a very exciting, and undoubtedly exotic, strange trip.