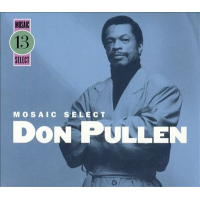 Hit play on just about any Don Pullen record and three things will strike you right away: his fierceness of spirit, deep respect for melody, and a barely-restrained urge to out-and-out make some noise. The late pianist's subversive tendencies come through most apparently in the form of punchy clusters and glissandi, exercised in giant sweeping swaths of sound that warp the focus of his music in unpredictable ways. But it's time to put the stale, superficial comparisons with Cecil Taylor to rest (and on this Pullen would have agreed). While both players exercise a degree of measured dissonance in their work, Pullen's emphasis on swing, blues, soul, and funk set him apart. His is not atonal music: it's thoroughly centered and grounded in the Afro-American tradition.

Pullen worked in the '60s with Giuseppi Logan and Milford Graves, but he reached more substantial audiences when he joined up with Charles Mingus from 1973-75. The very fine Changes One and Two , recorded in December of 1974, document this fertile association. The Mingus quartet brought Pullen together with saxophonist George Adams, a kindred spirit with a shared interest in stretching the foundations in new directions. The two would work closely together until Adams died in 1992. Pullen's own projects continued in parallel and therafter, reaching a high point in the form of his thrice-recorded African Brazilian Connection, until he died of cancer in 1995.

Ironically, Breakthrough was the first time in seven years that the Pullen-Adams unit would record on an American label. And what a joyous sound it is. Adams' "Mr. Smoothie" gets things going with a soaring melody and upbeat groove; his nearly ten-minute "A Time for Sobriety" casts more of a late-night glow, swinging lightly. Pullen's tunes are more varied in form, from the headlong rush of the staccato, pulsing "Just Foolin' Around" to the funky Afro-Caribbean bounce of "Song from the Old Country."

The relationship among these players (three of whom, including drummer Dannie Richmond, graduated from the Mingus unit, with Cameron Brown holding down the bass) feels fluid and full of life. There's a strong sense that they are working together to build tuneful pieces, instead of sparring or debating the details along the way. Even when engaging in off-kilter themes like the Monk-ish "The Necessary Blues," they stay tight.

Song Everlasting was recorded almost exactly one year later, but its free-spiritedness and flair make it seem like almost no time has passed. The only noticeable change is a general mellowing out on some of the slower pieces, which include the loping "Sing Me a Song Everlasting" and a very light "Serenade to Sariah." Almost naive in its sense of hope, especially when Adams picks up the flute, this piece submits to bare and unguarded sentimentality. To some listeners, its softness might be too much, but there are plenty of other options.

For example, Adams' opening "Sun Watchers" puts the group through a wildly rabid pace of back-and-forth commentary, teetering at the edge of the brink but pulling back (and together) before the chasm can open wide. His playing is fleet and articulate, even when he blurs notes and adds rough overtones as the temperature rises. A feisty thirteen-minute up-tempo blues shuffle, "1529 Gunn Street," lurks just minutes away; and finally, the funky soul jazz vamp-driven "Another Reason to Celebrate," where Adams breaks out with some fiercely thick blowing.

To my ears, the sweetest music on this set comes from the third album, New Beginnings, which places Pullen in a trio with bassist Gary Peacock and drummer Tony Williams. For a one-off unit, it sounds amazingly connected. Part of the success of the venture comes from the rhythm section's forward, muscular stance. Peacock's an amazingly versatile bassist, and here he not only offers due respect for vamps and the groove, but works the nooks and crannies in unexpected ways. Pullen's music has always been focused around time, even in the process of expanding and contracting it, and Williams respects that fact. It's no small trick to move from funk to swing to polyrhythm and back in the same piece, sometimes combining them into a surging mass.

Pieces like "Once Upon a Time," "Warriors," and "New Beginnings" build from relatively simple vamp-oriented foundations, which offer Pullen ample opportunity to engage in his signature swoops and swirls. For some listeners, the intensity may be over the top, so be aware. But to hear the pianist fly free, launched skyward by sympathetic players who share his affinity for outer sounds, is high-octane rocket fuel for the soul.

On the final recording in this box, things settle into a groove with less fire and more stomp. Random Thoughts brings two young players forward: bassist James Genus and drummer Lewis Nash. Nash is more attuned to swing and color drumming, helping round out phrases with well-placed hits that serve as a sort of attentive punctuation to the pianist's runs.

But even on "Andre's Ups and Downs" (the highlight of the entire box), Pullen's aerial gymnastics are barely restrained. He hits fast and hard, nearly punching the keyboard with cluster after cluster, before pulling back to the funk groove to which the other two players faithfully adhere. This balance between soulful strut and reckless abandon always marked Pullen's style, but in few scenarios does it play out so successfully.

The rest of the recording plays out faithfully in relatively restrained style. In this setting, there's more room for each player to work nuance and color. The jaunty swing of "626 Fairfax" is filled in with accents, bustling forward without hurtling along, as Pullen is often prone to do. And another openly sentimental number, "Ode to Life" (which would become the title of Pullen's ABC masterpiece, with a tribute to Adams, down the road), lingers sweetly in the air after the last chord dies off.

All this music is accompanied by the original cover art and original liner notes by Amiri Baraka, Lee Jeske, Don Pullen, and Stanley Crouch, which offer some insight but no particularly deep revelations on the music. Crouch's words, while relatively softspoken, are basically offensive to this reader. Crouch has long been self-righteous and judgmental toward the avant-garde. It's almost as if he thinks excuses should be made so a relatively noisy player like Don Pullen can be admitted to his grand pantheon. But so be it. Fortunately producer Michael Cuscuna, who adds a few words as well, has no such hangups.

On a personal note, Don Pullen has long been a source of inspiration to me, both musical and emotional. It's hard to name anyone who has created quite the same magical combination of inwardly-aware and outwardly-seeking music. Let's all look forward to the day when Ode to Life (Blue Note, 1993) will come back into print and the truest masterpiece of Pullen's life will once again find open and sympathetic ears.