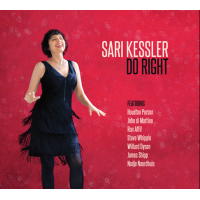 In just under five minutes—the running time for producer/percussionist James Shipp's album-opening arrangement of "Walk On By"—Sari Kessler successfully makes the case that jazz singing is her real métier. That particular truth may not have materialized until recent times, as Kessler walked away from a career as a clinical psychologist to pursue a life in music only a short while ago, but it's as clear as day now. And with no less an authority on the art of vocal jazz than the great Kate McGarry singing her praises and co-producing this album, it's obvious that those on the inside agree.

Do Right does right in so many ways. For starters there's the playlist, containing a classics-dominated assortment of shrewdly arranged numbers that perfectly balance intelligence and modesty. Then there are the musicians to admire. Kessler works with a crew of top-notch players here—veteran saxophonist Houston Person, rising star trumpeter Nadje Noordhuis, ace piano accompanist John di Martino, and sophisticated drummer Willard Dyson among them—and they all manage to complement her. By keeping such heavy company Kessler risks being overshadowed, but that risk never becomes reality. Instead, she simply thrives, carrying the program without issue. Whether due to her background in psychology, her work ethic, her God-given talents and intuition, or a combination of all of it, she proves to be a first-rate interpreter and dissector of songs. Her previous career likely contributes to her ability to tap into the marrow of a lyric and bring its essence into the foreground, her intonation is spot-on and her diction is something that other newcomers should take note of, and her phrasing is oh-so-natural and flexible. In short, she's the real deal.

While the large majority of this material will be familiar to listeners, these aren't the same old, same old versions. The aforementioned "Walk On By," for example, exists in a much different space than Dionne Warwick's take, built on an attractively laid-back framework and colored with vibrant cobalt commentary from Noordhuis' muted trumpet. Then there's Randy Porter's arrangement of "Sunny," which may just be the best version of the song to emerge in years. It's incredibly impressive without being showy, what with the sly metric twists, clever riffs, hip feel, and post-solo modulation there to lure the ears in. Other highlights include a haunting and hazy take on Duke Ellington's infrequently performed "The Gal From Joe's," a swinging "Why Don't You Do Right" that pairs Kessler's controlled sass with the bluesy tenor work of Person, a semi-swampy taste of "The Frim Fram Sauce" that becomes more flavorful as it plays on, and an all-too-brief goodbye in the form of an intimate "Moonglow." But to be fair and truthful, it should be noted that every performance on this album could really be classified as a highlight. There's not a weak track in the bunch on Do Right.

Walk On By; After You've Gone; Why Don't You Do Right; The Gal From Joe's; Sunny; It's A Wonderful World; I Thought About You; The Frim Fram Sauce; Feeling Good; My Empty Bed Blues; Too Close For Comfort; Moonglow.