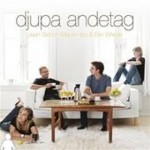 Djupa Andetag means "deep breaths" in Swedish. They're something that can be easily taken in the unpolluted atmosphere of Scandinavia. And at its best, Jean-Simon Maurin's music—light and lyrical, greatly influenced by pianist Bill Evans—is as fresh as a Baltic summer breeze. There's introspection but—perhaps because of his French ancestry—none of the brooding melancholy that is so often a hallmark of Swedish jazz. Having said that, he listened to Jan Johansson a great deal as a child, a pianist who demonstrated that quality in spades. On the other hand, Maurin has also been guided by Jan Lundgren, the most international pianist on today's Swedish scene.

For this, his second album, Maurin, aged 31, recruited—for good or ill—vocalist Elin Wrede. She joins forces with bassist Martin Lundberg and drummer Lars "Bagarn" Andersson, members of his regular trio. All the songs, with the exception of Van Morrison's "Moondance" (competently translated into Swedish by Anna Houmann, Andersson's wife, to become "Måndans"), are originals. Everyone involved positively bubbles with enthusiasm, as reflected in the cheerful cover spread of them laughing and pulling faces at the camera.

There's a certain dichotomy between Maurin's considerable abilities and the those of his collaborators. His elegant, swinging pianistics not only dwarf the efforts of Lundberg and Andersson, they feel at odds with Houmann's lyrics, which at best reflect youthful optimism and innocence, at worst spill over into embarrassing blue-eyed naïvete with over-large helpings of joy and hope. Jazz songs should surely be knowing, careworn, and at least a little worldly.

And, while she has talent, Wrede's breathlessly gung-ho vocals—particularly on "Grön Bossa"—tend to grate. The three instrumentals come as a relief. Maurin is particularly assured and interesting on "Soluppgång Över Degeberga" (Sunrise Over Degeberga—an area of the southern city of Kristianstad, where he was born). Left wanting more of the same, instead Wrede comes back with another infusion of joy and hope. And all this in the middle of the worst economic recession since World War Two.

Maurin currently lives on the Baltic island of Gotland, which is a long way from anywhere. Excepting the fact that legendary saxophonist Lars Gullin was born there, the place has had little impact on the world of jazz, the arts or, well, anything else really. However, Maurin will be moving back to the mainland soon, where he'll hopefully play in more challenging company and continue to develop his considerable talents.

These are early days. Maurin is a young man with a long way to go and Djupa Andetag is a step along the way.