Advertise
5
Catching Up With 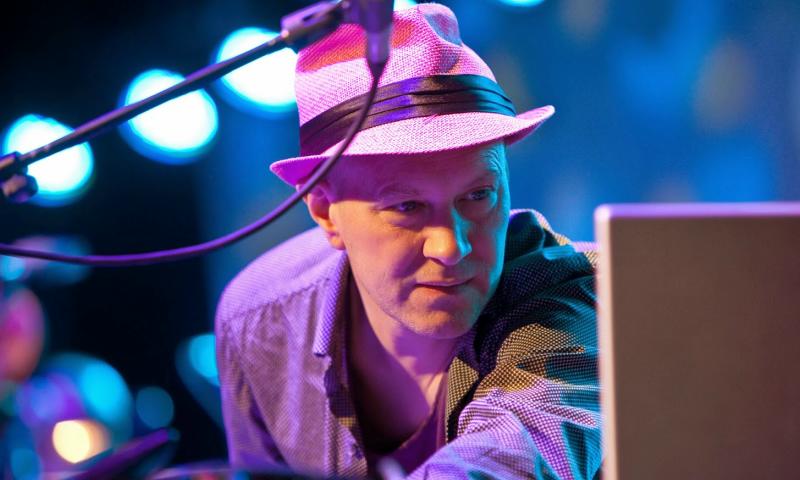 By Enrico Bettinello
January 16, 2018
Sign in to view read count
British pianist and composer Django Bates has always been a multifaceted artist. On his recent ECM release, The Study of Touch, he leads his Trio Belovèd (featuring Swedish bassist Petter Eldh and Danish drummer Peter Bruun) through a set of intriguing originals, as well as reworking the classic Charlie Parker composition "Passport."

We spoke to him about his latest record and discussed some of his past projects throughout his prolific career.

All About Jazz: What's the idea behind The Study of Touch? How did you prepare this album?

Django Bates: My Trio Belovèd had previously released two albums for my own label Lost Marble, Belovèd Bird and Confirmation, both focusing on my arrangements of Charlie Parker compositions. As we toured this music in recent years, I began to put my own compositions into the set to play around with the effects of juxtaposing Parker and Bates.

The next logical step was to make an album focusing more on my own music for Belovèd, and furthermore to put this music on ECM Records in hopes of introducing ourselves to a new audience.

AAJ: Despite The Study of Touch being mostly devoted to your original compositions, you have included one composition by Charlie Parker "Passport." What is your relationship with Parker's heritage?

DB: It felt right to keep a reference to Parker on The Study of Touch because his music is key to the formation of the band. I chose "Passport" because it's a new arrangement with a different approach: it's a miniature; a lot of character squeezed into a few minutes.Charlie Parker was my first childhood hero. Other children exchanged cards with famous footballers on them, but I went home to listen to and transcribe Bebop, to read "Bird Lives," and to even make a plasticine bust of Parker!

His music was playing as I was born and throughout my childhood, so it became as intrinsic to my life as language itself. The joy and the freedom, and yet the obviously huge discipline behind his saxophone playing, just connected with me for life.

AAJ: Recently you arranged and played Sgt. Pepper's repertoire with the Frankfurt Radio Big Band. What did you discover in the music of the Beatles that you did not know already, or expect?

DB: I began by transcribing the whole album and I must say that every bar was a revelation. The absolute commitment behind every note is stunning; there is no moment where something is left vague or unsolved. I knew there'd be an infinite range of sounds and textures but the more I listened, the more I marveled at the kaleidoscopic soundscape.

AAJ: For years you have established fruitful collaborations with Scandinavian musicians, from Marius Neset to the current band. What drew you towards the nordic scene?

DB: In 1990 I recorded So I Write (ECM) with Sidsel Endresen, Nils Petter Molvaer, Jon Christensen and we toured a lot in Norway.

Denmark became interested in me through the band Loose Tubes of which I was a founder member. The Danes found in me a British sense of humour that amused them greatly, so I worked with their Radio Band and some smaller ensembles. In 1997 Denmark awarded me the Jazzpar Prize, dubbed The Nobel Prize of Jazz.

This profile led to me becoming the first Professor of Jazz in Denmark's Rhythmic Music Conservatory in 2005 and I got to know many Scandinavian musicians during my six years there. I started a Danish big band called StoRMChaser that included Marius Neset, Petter Eldh, Julie Kjaer, and many more of the names that are currently wowing today's jazz audiences.

I'm happy that I have a Swede and a Dane in Belovèd as a connection back to that time.

AAJ: What is the status of older projects like: Human Chain and Delightful Precipice? Are they over or just dormant?

DB: In 2016 I presented Human Chain at Sarajevo Jazz Festival. I use that name when I'm presenting certain material for a ten-piece band including singer, but the musicians change depending on the region. Delightful Precipice... hmm, never say "never," but my recent work with big bands has involved sharing material like Sgt Pepper's between four existing bands; this is both pragmatic, more ecological, and fun.

AAJ: Your first albums on ECM were with the band First House. How does your current collaboration with Manfred Eicher compare with that which led to the recording of the two First House albums Erendira and Cantilena?

DB: When I met Manfred we talked about those early First House recordings. I said, "I now realise that I was very young then," and he said "Yes, so was I." I hadn't thought of it like that! Every album recording is a new experience. As far as the recording sessions of The Study of Touch are concerned, I would say that there was more confidence, trust, and wisdom in the room than many recordings I've witnessed.

AAJ: Your writing for large ensembles is characterized by complexity and interlocking minute details which can only be possible with large bands. How do you approach music for solo piano or for a trio like the one that plays in The Study of Touch?

DB: There is still plenty of room for complexity in a trio composition. But everything is transparent so the listener feels less bamboozled by all the detail of a large ensemble.

DB: By choice I have not played many other people's projects for many years but while waiting for the release of The Study of Touch, I was unexpectedly asked to record with Anouar Brahem for the album Blue Maqams. Manfred had played my trio recording to Anouar and he felt I would fit into his next project.

Recording with Anouar, Jack DeJohnette and Dave Holland was a great and serious pleasure and I'm really looking forward to performing that music on tour in April 2018. Belovèd will play in U.S and Canada this summer and we'll see what other surprises come along during the year.

AAJ: What are currently listening to?

DB: I'm listening to a new piece I'm writing for Belovèd. It may be called "Never-Ending Strife" and, perhaps for that reason, I am unable to find an ending for it. I'm also listening to Telemann, Elis Regina, Bennie Maupin, and especially for New Year's Resolution physical exercising: "Can't Let Go" by Earth Wind and Fire!