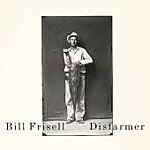 Often a cinematic writer, guitarist Bill Frisell has composed film scores in the past, including his back-to-back release of Music For The Films Of Buster Keaton: The High Sign/One Week and Go West (both Elektra/Nonesuch, 1995) and, more recently, music for the 2007 Canadian film All Hat (Emarcy/Universal, 2008). Instead of writing for images in motion, however, Disfarmer is an album of largely original music inspired by Depression-era photographer Michael Disfarmer's arresting images of rural America. Frisell manages to capture the ambience of Disfarmer's work, at times as ethereally static as those single frames, but elsewhere inspired to create pulsating Americana music that continues to skew ever so slightly—a longtime definer of Frisell's best work.

Violinist Jenny Scheinman, steel guitarist/mandolinist Greg Liesz and bassist Viktor Krauss are all longtime collaborators, with Krauss dating back to Frisell's much-lauded (and controversial) Nashville (Nonesuch, 1997). Disfarmer shares much with Nashville's drummer-less bluegrass vibe, as it does the even more folkloric The Willies (Nonesuch, 2002). Still, while those albums were as much a part of Frisell's persistent anti-soloing aesthetic as any he's recorded in recent years, Disfarmer is even less about playing and more about concept, despite the inescapable fact that it couldn't succeed as it does without the effortless interaction and instrumental acumen of its participants.

Tracks like the collectively improvised "Shutter, Dream" are as atmospheric as anything Frisell's ever done, while the hauntingly lyrical "Think" ranks with "Strange Meeting" and "Monica Jane," both heard at their best on This Land (Elektra/Nonesuch, 1994), as some of his most poignant writing. "Focus" layers a bittersweet, countrified melody over Scheinman's relentless, Philip Glass-like layered arpeggios, while "Peter Miller's Discovery" posits strong counterpoint between Scheinman and Frisell's serpentine theme and Krauss' soft yet undeniably rhythmic lines, with Liesz weaving lines like thread through a needle.

Frisell has performed this music live, and uses music boxes and looping to augment the real-time potential of 26 miniatures ranging in length from one to just under five minutes, but judicious overdubbing turns Disfarmer into a more expansive work, albeit a delicately orchestrated one. Less about soloing and more about mining the essence of the simplest melody, Frisell's quartet proves capable of empathic exploration throughout, while turning a familiar tune like Arthur Crudup's buoyant "That's Alright, Mama" into something both authentically of its period and, at the same time, unmistakably modern.

In researching Disfarmer, Frisell traveled to rural Arkansas and, as much as the album reflects in sound the utterly human photographs reproduced in the liners, it's also something of an aural travelogue, evoking emotions ranging from the thrill of discovery to gentle longing. The three-part "Arkansas" suite is a rarified summoning of times past, even as Frisell continues to twist singable melodies on their side with the slightest alteration. The feather-light but resonantly deep Disfarmer continues Frisell's pursuit of Americana; a haunting look and the intrepid supposition of what one documenter of that time may have been thinking, as he created his starkly compelling images.