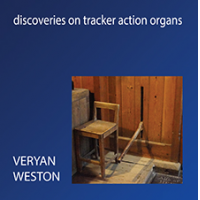 This new solo album from keyboardist Veryan Weston was recorded in May 2014 on tracker action organs in seven churches located around England. The recordings here document some of the preparatory research that Weston did ahead of a tour of churches with tracker action organs. That tour involved Weston plus violinist Jon Rose and cellist Hannah Marshall, so this album should be considered a companion piece to Tuning Out (Emanem, 2015), the album recorded on the tour.

As Weston explains in this album's sleeve notes, tracker action organs were completely mechanical and had a direct physical relationship between the player and the instrument. Small ones only had a short time lapse between a key being touched and the pipe making a sound. They originally had a manual pump for the bellows but these have now been replaced by electric generators supplying air to the bellows. When each stop was gradually pulled out or pushed back in while a key was pressed, many stages of sound could be heard, from a breath to a whisper to a glimmer of a pitch and sometimes various harmonics. All of which makes these organs unpredictable, hence the need for preparatory research before a tour, and the possibility of using them creatively.

Remarkably, in five days Weston visited about twenty-four organs around England and all the trials were recorded; the seven that are heard here were selected by Martin Davidson. Of those seven, only three were actually used on the tour proper. The recordings capture Weston trying out ideas and exploring the properties of each organ, so the album is well titled—he was actually making discoveries about them as he played the organs. As the brevity of some of the tracks indicates—"Quiet Fanfare" from South Croxton lasts under three minutes, "Proceeding with Caution" from Horstead under five—often there was not much time for exploring, as church staff were "hovering" in order to close up the church.

It makes fascinating listening to hear each organ being forensically probed to determine what it is capable of and what its limitations are. Along the way, Weston employs the organs to generate some fluid, engaging music that transcends the reason for it being played. Sometimes the sound of a particular organ makes it all to obvious why it was not selected, but in other cases some that were not used on the tour sound just as good as those that were... Weston obviously had some difficult choices to make after he had concluded his tests. So, this album serves two complementary purposes: firstly, its music makes good listening both in its own right and alongside that on Tuning Out; secondly, it is an interesting documentary of the painstaking work that must precede a tour such as this if it is to be successful.