BY EDWARD BLANCO
August 9, 2016
Sign in to view read count 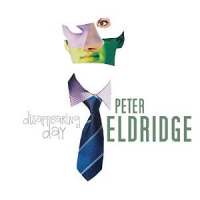 Pianist, songwriter and Grammy Award-winning singer Peter Eldridge unveils his fifth solo album with Disappearing Day, presenting a varied mix of styles from jazz and alternative to a country-tinged piece, on seven original tunes and five covers offering arrangements from Paul McCartney, Leonard Bernstein to Frank Sinatra. This is not your typical jazz vocal album where the artist is backed up by a trio or quartet and voices standards like so many other vocalists often do. This album showcases different styles of song fusing genres in a tasteful manner and providing a refreshing new approach not currently being attempted by anyone on the jazz scene today.

Eldridge assembles a small ensemble of players for this project with a core group of musicians on the majority of tracks including Matt Aronoff on bass, Ben Wittman on the drums with Marc Shulman and Alan Hampton sharing duties on the guitar. A founding member of New York Voices (celebrating its 25th year anniversary in 2016), Eldridge has fellow Voices member Lauren Kinhan appearing as a special guest with the background vocals on "Forever Blue," one of the outstanding songs of the recording which also features saxophonist great Anat Cohen on clarinet. For his original "Around Us," a soft and beautiful atmospheric ballad, Eldridge refrains from singing playing the piano accompanied by Aronoff on bass as the main feature of the song is, The Elm City Girls' Choir directed by Tom Brand.

The music starts out on the spicy and percussive original "Mind to Fly" highlighting the leader on vocals and piano with Wittman on percussion and Jo Lawry on the triangle. McCartney's "Jenny Wren" is delivered here as a haunting piece of music with light strings as the singer voices the tune in a slightly dark manner. The original "Wish You With Me"—left out of a documentary film scored by the leader—is another light soft ballad where Eldridge is joined on vocals by Becca Stevens, continuing the same style on the following "Driving to Town Late to Mail a Letter."

Shifting format to a standard trio, Eldridge presents a brief and unique rendition of Sinatra's classic "Witchcraft," an up tempo and livelier version of Luciana Souza's "Home" and a warm and humbling take of Bernstein's "Some Other Time," to close out the session. There's little doubt that Eldridge's soulful vocals is the main feature of Disappearing Day, but his melding of different musical styles and the creative originals on tap, make this vocal album compelling on many fronts,

Mind To Fly; Looking Forward To Looking Back; I Wish I Had An Evil Twin; Jenny Wren; Forever Blue; Wish You With Me; Driving To Town Late To Mail A Letter; Scared Of The Dark; Witchcraft; Around Us; House; Some Other Time.