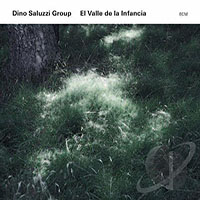 In his 32-year relationship with ECM Records, Argentinean bandoneonist Dino Saluzzi has explored many paths—paths upon which he has rarely traveled more than once, even if there were certain road marks common to them all. A pair of trio recordings with his son, guitarist José Maria Saluzzi, employed two different bassists—Marc Johnson on 1997's Cité de la Musique and Palle Danielsson on 2003's Responsorium—their graceful elegance possessing a similar but different intimacy when compared to the bandoneonist's ongoing duo with cellist Anja Lechner, which first began with Ojos Negros (2007) but then expanded to a trio with the addition of his brother, saxophonist/clarinetist Félix "Cuchara" Saluzzi, together alone on 2011's Navidad de los Andes, following the trio's first encounter on El Encuentro (2010), a more sweepingly ambitious orchestral project.

There have only been two contexts within which Saluzzi has worked more than once: first, the solo recital of his 1983 ECM debut, Kultrum and its 1988 follow-up Andina; and second, his Dino Saluzzi Group, longstanding despite only three recordings to its name—1992's Mojotoro, 2006's Juan Condori, and now, El Valle de la Infancia. Still, these three recordings may be connected by name and the consistent lineup of Saluzzi's son (though José Maria actually started on drums on Mojotoro, making his first appearance as a guitarist on Cité de la Musique) and the bandoneonist's brother Félix; but if these three members of the Saluzzi family have brought some consonance to their small discography, the shifting of the rest of the personnel and attendant additional instrumentation have also made each recording an entity unto itself, with the repertoires clearly predicated on their distinct lineups.

Expanding Juan Condori's quintet to a sextet—with bassist Matías Saluzzi another consistent band member, but drummer U.T. Gandhi replaced by Quintino Cinalli and guitarist Nicolas "Colacho" Brizuela added to the mix—El Valle de la Infancia is largely a more intimate, gentle and, in some cases, rubato affair; less a full-on group project and more a series of miniatures that form, in turn, a series of suites and a stronger sense of compositional form, as on the opening "Sombras," written by Dino Saluzzi who, as usual, contributes the lion's share of the material.

"Pueblo," a three-part suite, opens with "Labrador," a melancholic duet between José Saluzzi and Brizuela; "Salavina, written by Mario Arnedo Gallo, continues the duet but, halfway through, brings Dino into the picture, first solo and then with Cinalli and bassist Matías, leading to a final minute where, with a breezier pulse, the guitarists are brought back in support of the bandoneon's warm and, despite remaining minor-keyed, somehow more propitious melody. It acts as a segue into Ariel Ramírez's closing "La Tristecita," where bandoneon and saxophone engage—that most lovely sound of reed coupled with reed—before the rest of the group gradually reenters, bringing the nearly 10-minute suite to a more buoyant and optimistic conclusion.

The bandoneonist's "A Mi Padre y a Mi Hijo" is an episodic, ten-minute composition that covers a surprising amount of ground, its gentle, rubato opening colored by Cinalli's cymbals, leading to a breezy, guitar-driven initial statement of the theme by Dino. As Matías Saluzzi engages, a more defined tempo asserts itself in time for a brief but eminently lyrical tenor saxophone solo that leads to a recapitulation of the theme and, ultimately, a bandoneon solo that suddenly turns a cappella. A set-up in itself, it dissolves into a softly stated drum solo that segues into an arpeggio-drive closing section where guitar, bandoneon and saxophone speak with a single voice, bolstered by Matías' gentle arco and CInalli's swelling cymbals, only to turn to an electric bass solo that combines flamenco-like strumming with octave glissandi. A bandoneon/cajón duet follows, the introduction to a contrapuntal finale that, ultimately, brings elements of all that's come before together for a conclusion that's as surprising as it is inevitable.

While there's plenty of form to be found, there's no shortage of freedom either; the two-part "Urkupiña" suite opens with the rubato "Salida del Templo," a sketch of a composition that relies on the ears of the group to construct an improv-heavy but still objective-driven piece that ultimately acts as an introduction to "Ruego, Procesión y Entonación," a softer ballad where, following the out-of-time theme, the heartbeat-like pulse of Matías' electric bass, a low, droning bandoneon and spare clarinet lines that seem to blend in with the bandoneon provide the foundation over which both guitarists solo—one following the other, as the second moves into darker climes while the rest of the group gradually coalesces to return to the now almost-forgotten theme with greater dramaturgic energy.

In many ways, every Saluzzi album represents an ongoing consolidation of what's come before. Since Juan Condori, the bandoneonist has worked in everything from intimate duos to grander orchestral climes as he's explored a most personal nexus where Argentinean folk tradition and contemporary classicism meet. While the emphasis of El Valle de la Infancia certainly leans more on the tradition, the manner in which Saluzzi has constructed his compositions is clearly informed by more complex means. Cinematic in its evocation of places most who hear this music will never have seen, El Valle de la Infancia is yet another step along one of the many paths traversed by a 79 year-old bandoneonist who, contrary to most at his stage in life, continues to grow and hone his craft. That he continues make music—not just this good, but making music, period—as he approaches octogenarian status in 2015, is surely something to be cherished—and something for which his fans should be truly grateful.