BY DAN BILAWSKY
September 6, 2021
Sign in to view read count 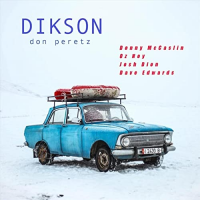 Dikson takes its name from a sparsely populated arctic port located in northern Russia. And its music, though heated by strong individualists, largely reflects that origin, embodying the powerfully icy atmosphere of its influence. Masterminded by drummer Don Peretz, this eight-song jazz-tronica journey, nodding toward a remote realm at the top of the world, bumps, grooves and gives off an arresting, frigid energy that's all its own.

Combing through hours of playing from the likes of tenor saxophonist Donny McCaslin, guitarist Oz Noy, bassist Dave Edwards, and drummer Josh Dion, and using the pandemic pause to compose, assemble and mix, Peretz created a world which, while grounded in logic and time, speaks to a vast universe of possibility. Opening on "Impulsed," he sets off to dominate the cosmic dance floor as his drums and Edwards' rubbery bass lock and pop beneath McCaslin's flights of fancy. Then "Naughty Setback" finds Noy taking the band to the far reaches of the universe; "Edifice" eyes open landscapes. where McCaslin is free to diagram and ponder uncharted spaces; "The Numerals" stirs a mélange of synths and drums, with Dion and Peretz plying their multifaceted trades; and "Chicanery" serves up some sinister avant-funk which is right in McCaslin, Noy, Edwards and Peretz's collective wheelhouse.

Those first five tracks develop a clear picture of what Peretz is pushing, and two of the final three offerings—the hyper "Prickle and Gu," with its futuristic fusion, and "The Bull and I," where bass and drums get down and out in astral alleyways—amplify those ideals. It's only the finale—"Margettes Field," exemplifying a quiet calm—which stands apart, acting as the perfect exit music to drift away on. Serving as curator, editor, architect, percussive engine and musical glue, Don Peretz shapes a uniquely compelling and electrifying statement.

Impulsed; Naughty Setback; Edifice; The Numerals; Chicanery; Prickle and Gu; The Bull and I; Margettes Field.