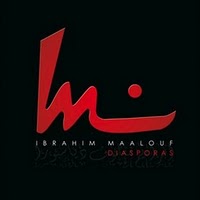 Paris-based trumpeter Ibrahim Maalouf's moody mix of jazz, groove and Lebanese traditional music comes across rather like a cut-up novel by William Burroughs or a collection of short stories by Paul Bowles, or at least a shot in that direction. Partly it's the source material, in which Maalouf's east Mediterranean musical heritage replaces those authors' fascination with Morocco; partly it's the structure of the album, in which a series of relatively brief, cross-referential tracks, most lasting between two and less than five minutes, are assembled in an episodic collage. Though carefully put together over three years, the music has an attractively rough-edged feel: hot, sun baked and m'hashish, as Moroccans would say (and as the title of the fourth track confirms).

Diasporas was Maalouf's debut album, and was originally released on his own Mi'ster Productions label in 2007. It's been followed by Diachronism (Mi'ster, 2009), which inhabits similar territory but spread over two discs. Diasporas, pithier and more rigorous, is the more enjoyable of the two albums and its release into the wider European marketplace is a welcome development.

Maalouf's ace up the sleeve is his use of an unusual four-valve trumpet invented by his father, Nassim Maalouf, in the 1960s. The extra valve allows the accurate production of quarter-tones, on which Arabic makams (modes) are built. Accompanied by Francois Lalonde's insistent drum and percussion rhythms, which pare the complexities of classical Arabic meters down to their ritual music origins, and complemented by guest musicians playing oud (lute), ney (end-blown flute), kanoun (zither) and buzuk (bouzouki), the effect is tradition-based but unmistakably modern.

On four tracks, Maalouf uses a string section which evokes the style of "Egyptian" film music. But most of the music is made by himself and Lalonde. Electronicist Alex McMahon, who completes the core trio, adds sparingly applied loops and layers, the last especially effective on "Missin' Ya (Night In Tunisia)."

Occasionally, the geography evoked on Diasporas isn't so much Arabic as Mexican-shot spaghetti western. It must be all that sun, sand and austere trumpet. The Ennio Morricone resonance is particularly marked on "Last Wishes," which ends, perhaps with more of a nod to Federico Fellini, with a faded-in minute or so of "Que Sera Sera" played on a fairground organ. It's one of several unexpected twists and turns during 46-minutes of ultimately uncategorizable but compelling music.