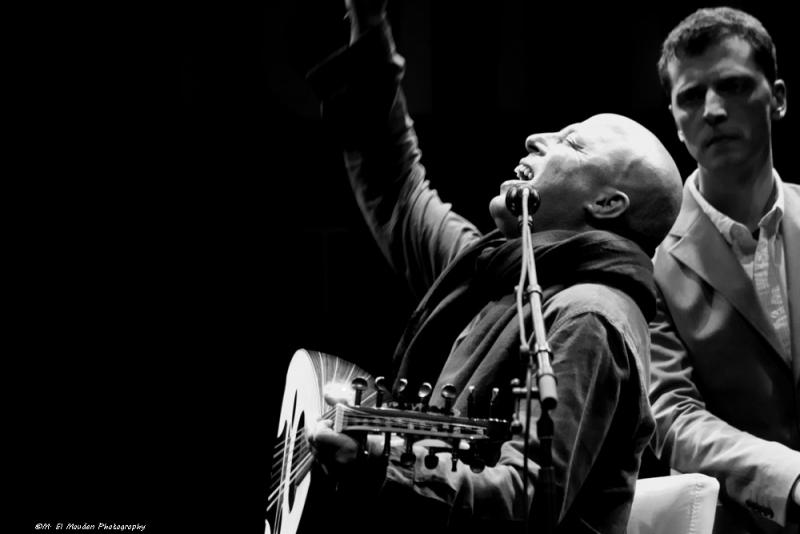 On April 1, 2013, the Jazzablanca Festival audience was in for a unique experience. Programmed on the third day of the festival and subsequent to singer Melody Gardot and Belgium's Vaya Con Dios , singer/oudist Dhafer Youssef traced a journey from mysticism to jazz via rock beats. During the course of 90 minutes, Youssef's voice transported the audience to moments of epiphany where elation and melancholy met, his long vocal solos followed by an eclectic music that could not but enchant his fans, who hollered, tapped on the floor and emulated the frenzy onstage.

The 10-minute ''Les Ondes Orientales'' opened the show slowly, with Youssef's oud strings and Kristjan Randalu's carefully fingered piano waiting for ascending drums and bass to announce the beat. Meanwhile Youssef's vocal outburst gave Randalu space to indulge in a solo, the singer intervening at the very end with his own soaring, bliss-manifesting solo.

Next came ''Hayastan Dance,'' also from Abu Nawas Rhapsody (Jazzland, 2010). Here, Youssef played in a different register, marked by a fast-paced swing between piano and lute, and a hard rock beat pounding behind it. The repetitive rapid oud rhythm offered each musician time to plunge into a solo, each one introduced Youssef: in addition to Randalu, double bassist Phil Donkin and drummer Chander Sardjoe.

Back to Sufism, Youssef introduced the third song through an explanation of the Arabic word "كفر," which denotes atheism but connotes the fact of concealing something. Quoted from Abu Nawas' poetry, the song ''Profane ,the Wine Ode Suite,'' originally composed with pianist Tigran Hamasyan, plunged the audience into a very meditative atmosphere where Youssef's high pitched shrieks reached the sky.

''Interl'Oud'' appeased the atmosphere through a soft oud interlude, paving the way to a graceful but poignant ''Odd Elegy,'' where Randalu's ascending piano solo spurred Youssef's ethereal voice to go full blast; the appreciative fans gave a roaring standing ovation. Then, Youssef sat back in his chair to prepare for a delicate vocal solo. He tapped on his breast to release fragmented shrieks, preparing for a trance performance where, once again ,Youssef had to push his musicians to a close with his soaring voice.

To respond to the audience request, Youssef played ''Khamsa, the Khamriyyat of Abu Nuwas.'' Characterized by Abu Nawass' introductory poem, the song opened with a slow rhythm and then turned into a rapid dialogue between Donkin and drummer Sardjoe.