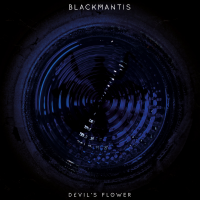 Might there be a better time to sit down and listen to an album whose title evokes poet Charles Baudelaire's Les Fleurs du Mal, has track titles such as "Lament" and "Dead Leaf" and a PR pitch that talks about the "darker electronic side" of its composer's music, and comes with sleeve art redolent of a dystopian near-future? You might think so. But actually, April 2020 is as good a time as any, because far from being a bummer, Devil's Flower is engaging, beautifully crafted, uplifting stuff.

The album is the conception of Cardiff-based producer Deri Roberts of Slowly Rolling Camera, which since 2013 has released four well-received albums of electronica-infused future jazz on Britain's Edition label. Roberts began his career as a sound designer and soundtrack composer, and Devil's Flower is an eight-piece suite that meshes that background with spacey jazz and electronica.

There is a hefty jazz strand running through Devil's Flower, but it is not a jazz album, or at least one that most people would recognise as such. Roberts is clearly a fan of slow-burning drone music, too—the final track is dedicated to La Monte Young—but Devil's Flower is not a drone album either. And while electronica is a core feature, nor is it an ambient album: there is too much substance and far too much unfolding for that. Brian Eno, who should know, defined ambient as "music that does not demand the listener's attention, but which rewards that attention if it is given." Devil's Flower, however, does, politely but insistently, demand your attention.

Roberts is the central figure here, playing trombone and synths as well as composing and producing. He is supported by a terrific group of musicians. Saxophonist, bass clarinetist and flautist Ben Waghorn, whose c.v. includes trip hoppers Portishead, who are based just across the River Severn estuary from Cardiff, in Bristol, is a brightly shining presence (or perhaps dark star), as is keyboard player Mark Sambell. Electric bassist and Moog player Jon Goode and drummer Elliot Bennett keep everything grounded.

It all goes to show that if you cannot judge a book by its cover, neither can you so judge an album.