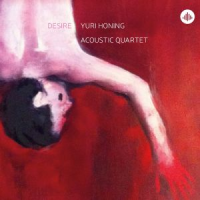 It's been three years since the Yuri Honing Quartet's True (Challenge Records, 2012), a sumptuous all-acoustic affair that was in stark contrast to the powerful, duel electric guitar-driven Wired Paradise. That particular group hasn't recorded since White Tiger (Jazz in Motion Records, 2010), though the retrospective compilation North Sea Jazz Legendary Concerts (Bob City, 2013) captured it and Honing in other settings at the famous Dutch festival between 1996-2012. In between Wired Paradise and his quartet releases Honing collaborated with musicologist/recorder player Erik Bosgraaf on Hotel Terminus (Brilliant Classics, 2013)—a fascinating blend of baroque, jazz-rock and ambient textures. Here Honing once again immerses himself in a dreamy acoustic reverie of smoldering passions -expressions of different feelings of desire.

The one change in line-up since True sees Icelander Gulli Gudmundsson replace Ruben Samama on double bass duties, but otherwise