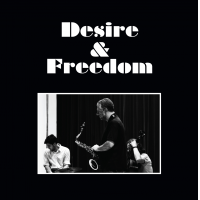 Desire And Liberation constitutes only the second album in Portuguese saxophonist Rodrigo Amado's Motion Trio discography not to feature a guest since their eponymous debut (European Echoes, 2009). While some may decry the lack of a foil for the leader's muscular tenor saxophone (and past collaborators trumpeter Peter Evans and trombonist Jeb Bishop supplied that and more), it does present an opportunity to appreciate the finely wrought interchange of the core trio completed by drummer Gabriel Ferrandini and cellist Miguel Mira. Over the years they have developed a profound mastery of group dynamics, which allows them to navigate their off-the-cuff constructs with a clear feel for both their relative situation and individual options.

Amado subjects his extemporized melodies and nagging phraseology to forensic reexamination, occasionally extended into the realms of noise and unconventional texture. Ferrandini substantiates his position as one of Europe's brightest upcoming drummers. He proves sensitive, swiftly responsive and imaginative such that each sound is unexpected but in hindsight just right. Meanwhile Mira purveys a rapidly articulated counterpoint. His cello, always picked never bowed, allied with Ferrandini's tonal wit produces an airy feel such that they create free jazz with a sense of rhythmic momentum which never veers into power trio territory.

The band operates as an egalitarian unit, across a program of three spontaneously generated selections recorded in a Lisbon studio in February 2016. That's obvious from the outset where Mira sets out a nimble pizzicato line of sudden leaps and flurries while Ferrandini lays down an inventive carpet of percussive ingenuity and Amado skitters without claiming the spotlight. In confirmation that this is an ensemble product, everyone plays almost all the time, with the rapid fire cello/tenor duet later in the busy full on "Freedom Is A Two-Edged Sword" one of the few exceptions.