By Troy Dostert
December 19, 2017
Sign in to view read count 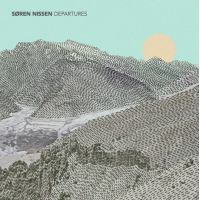 Although Canadian bassist Søren Nissen is a youthful presence, just a few years out of college and currently showcasing his debut release as a leader, don't let his age fool you: there's a lot of wisdom, musical and otherwise, on display here. Bookending Departures, Nissen's auspicious seven-track album are brief recorded excerpts from speeches by Jiddu Krishnamurti, stressing the importance of spiritual discovery; and it's clear that Nissen has been on that search personally, having spent extensive time traveling in India and teaching at the Global Music Institute in New Delhi. That experience shapes his music in important ways, lending creative depth to Nissen's post-bop compositions.

From the moment Agneya Chikte's tabla emerges on the album's opener and title track, the eastern influences on the music are unmistakable. Indian classical motifs are present throughout the record, sometimes in a meditative vein, as on the ethereal "Eyes of Riya," or in more dynamic and energetic ones, as on "Alternatives," where a lively Carnatic rhythm emerges midway through the track. But what's most striking about Nissen's writing is that these facets don't supplant the jazz-based identity of the music; instead they complement it and enrich it, giving it another dimension that adds to its appeal. Nor are the synth parts that color a lot of the tracks obtrusive or attention-grabbing. They provide just the right atmosphere to let the music breathe, as it occupies a comfortable space between western and eastern musical traditions.

Nissen's an adept instrumentalist as well, with a lithe rhythmic sensibility on upbeat tracks and a strong lyrical voice on the more reflective ones. Drummer Ian Wright provides plenty of pliable energy, moving effortlessly between idioms, sometimes multiple times within each piece. And the skilled contributions of tenorist Jeff LaRochelle are also central: he's able to bring the heat with a blistering solo on "Beyond Truth," but his gorgeous playing on the lovely ballad "Mantra" is equally moving.

Especially for a debut record, Nissen's Departures reflects a maturity of concept and execution that is rather impressive. As Nissen continues his far-flung musical journeys, the results will be well worth waiting for.