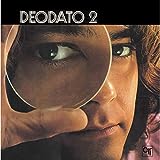 The surprise success of “Also Sprach Zarathrustra” on Prelude prompted Deodato to quickly follow with Deodato 2, a record that closely followed the template of his first number one hit. Deodato knew there was a lot of money to be made courting the rock audience, and there’s little on this record that could safely be called jazz. However, this record still stands up remarkably well today, unlike some of the other keyboard-driven records from the era. This time “Rhapsody in Blue” and “Death of A Pavane Princess” get the revisionist treatment and they provide a nice contrast to one another; the former is all funky electric piano and fierce rock and roll guitar, the later a minimalist piece with synthesized strings and icy piano flourishes. However, the real gems are the Deodato originals; disco-ish workouts like “Funky Strut” and “Skyscrapers” probably appealed to Stevie Wonder and Earth, Wind, and Fire fans originally and will find favor with the club scene today. Three bonus cuts are added to the original running time, including a lovely tune called “Venus” and a passable run through of Steely Dan’s “Do It Again”. Although Prelude is still the better of the two, Deodato 2 isn’t far behind.