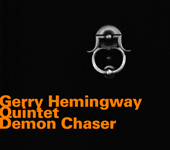 Demon Chaser, which documents a live concert recorded at Ottenbrucher Bahnhof in Wuppertal-Elberfeld, Germany on March 2nd, 1993, stands tall in drummer Gerry Hemingway's discography as one of the finest achievements of his celebrated transatlantic quintet. This is its second printing.

Synchronous with the dissolution of the classic Anthony Braxton quartet of the late eighties/early nineties, Hemingway embarked on a different path, eschewing Braxton's oblique methodology in favor of an open-minded neo-traditional approach. Comprised of artists from America and the Netherlands, Hemingway's "transatlantic quintet" as it became known, lasted eight years before he finally disbanded the group due to travel costs.

The quintet's American lineage featured fellow Braxton alumni Mark Dresser on contrabass and Amsterdam resident/American expatriate Michael Moore on an assortment of reeds. Rounding out the group were fellow Amsterdam residents trombonist Wolter Wierbos and cellist Ernst Reijseger, high-profile members of the mercurial Dutch jazz scene. By the time of this recording, the quintet was a regular touring ensemble. Its empathy and accord was readily apparent, no matter how far out the music went.

Opening the date is the appropriately titled "Slamadam," a rousing, angular number spotlighting Hemingway's frenetic percussive capabilities and the quintet's raw, expressive potential. A multi-faceted percussionist with a wide dynamic range, Hemingway varies his approach according to the mood of each piece. As effusive and visceral as his salvos on "Slamadam" are, his delicate accents on the spectral tone poem "Buoys" are the inverse—spacious and introspective. His ability to convincingly execute a variety of styles, altering his touch and phrasing from one piece to another, is an example of his dynamic versatility. Rather than falling victim to dilettantish excess, his encyclopedic knowledge of international drumming traditions informs every downbeat, lending his performances an air of cross-cultural unity.

The quintet embarks on an extended, swirling deconstruction of "A Night In Tunisia," taking great liberties with the tune's basic form, abstracting it almost beyond recognition while maintaining the core elements of melody, harmony and rhythm. The brooding title track is fraught with cinematic tension, a dramatically ascending set-piece that climaxes with Moore's vocalized alto cadenza sputtering aloft a scintillating mosaic of sinewy harmonics. Highlighting the quintet's swinging lyricism, "Holler Up" and "More Struttin' With Mutton" feature a pair of lilting melodies bolstered by euphonious improvisations, with special attention paid to Wierbos' garrulous slide work, Moore's plangent cadences and Reijseger's sonorous arco.

This was the quintet's second to last album for Hatology before recording its swan song (and masterpiece) for the label the following year, the album-length suite The Marmalade King. Featuring a prototypical set-list, Demon Chaser is a stellar snapshot of one of the best working bands of the mid-nineties.