By Dave Nathan
October 1, 2002
Sign in to view read count 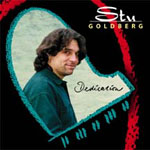 Stu Goldberg cut his teeth working with some of the leading fusion practitioners of the day including Al DiMeola, John McLaughlin, Larry Coryell and Wayne Shorter. He also has an impressive list of credits for TV and film scores. For his latest recording endeavor as a leader, his fifth since 1982, Goldberg returns to the original concept of fusion jazz which has pretty much degenerated into a cloying mix of jazz, pop and shallow R&B ideas. All the cuts come from Goldberg's pen. There was more than a handful of creativity poured into the shaping of this CD, both in terms of the basic compositions and the improvisations thereon (although it's hard to figure out where the former leaves off and the later takes over). But tunes like "Westward Reach", which runs for almost eight minutes, offers a variety of innovative and ear catching melodies. "Being with You" is a soft ballad laid on top of some dissonant chords laid out by Goldberg. As important as the piano of Stu Goldberg to the success of the album is the effective and judicious use of the soprano sax by Kenny Goldberg. Instead of that cloying, whining sound that too often one hears from this instrument these days, Goldberg adds substance and dynamics to his playing. In doing so, he builds a variety of pleasant musical images. The only downside to the album is that one wishes there could have been more variety in the music. After about the 4th track, one's mind becomes a bit numb with the feeling of "didn't I just hear that?" But nice playing anyway.