By David Rickert
November 29, 2008
Sign in to view read count 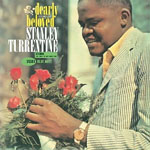 If ever there was a horn that was a perfect pairing with the Hammond B-3, it was Stanley Turrentine's. His best work was always done in combination with an organ (usually that of his wife Shirley Scott) where he coaxed out purring, laid back melodies over simmering chords. The Prestige label would take the organ combo and run it into the ground with records destined for the jukebox, but Turrentine always kept one foot in the world of jazz, mixing soul with sophistication.

Dearly Beloved is one of the best of his Blue Note records and features patient renditions of songs that are full of class and light on the apostrophes. There are no guitars or other horns to clutter the sound, just Turrentine, Scott, and Roy Brooks on drums. The group takes "Baia" at a simmering pace, while "Wee Hour Theme" gets the late night club treatment. What follows is faithful renditions of standards rendered with aplomb and class. Scott's organ playing is not as accomplished as many of her contemporaries, yet she is content to stay in the background and let Turrentine work his magic, occasionally providing a solo or two.

Although Turrentine's best work was still far ahead for the CTI label, Dearly Beloved is a prime example of his Blue Note work, which wasn't half bad either. A smoking album from one of the greats.

Baia; Wee Hour Theme; My Shining Hour; Troubles of the World; Yesterdays; Dearly Beloved; Nothing Ever Changes My Love For You.