By JEROME WILSON
December 5, 2019
Sign in to view read count 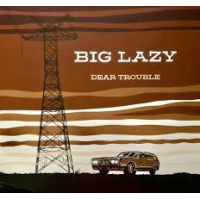 The trio Big Lazy plays a frisky type of instrumental music which draws on jazz, surf rock, country and other genres. In the tradition of versatile guitarists like Danny Gatton and Duane Eddy, Stephen Ulrich's lean, twanging sound creates a sonic landscape full of dusty highways and shadowy streets. He billows, trembles and chugs through leisurely melodies with style as bassist Andrew Hall and drummer Yuval Lion give him rock-steady rhythmic support.

Some of the group's work sounds like an evocative film soundtrack. On "Dream Factory," Ulrich creeps over a bumpy rhythm with a taut slide guitar melody that could be a lost Ennio Morricone Western theme. Other pieces create noirish thriller atmospheres; "Cardboard Man" is slowly sinister carousel music which composer Nino Rota might have written for a spy movie, while the James Bond theme is evoked both in the desert highway setting of "Exit Tucson" and the woozy tropical exotica of "Fly Paper." Elsewhere, the trio shows it can throw down in the style of a veteran roadhouse boogie band. "Sizzle & Pops" is an infectiously funky dance number and "Cheap Crude" plows a rockabilly bop furrow where Ulrich's wild guitar soloing nods towards Charles Mingus' "Haitian Fight Song."

The band is very capable on its own but, on several tracks, guest musicians enhance the sound. Marc Ribot trades choppy guitar solos with Ulrich over a slow-rocking ska beat on "Mr. Wrong," and adds his own tremolo magic to the creepy ambiance of "Cardboard Man." Marlysse Rose Simmons plays billowing organ on the tango "Ramona," and Steven Bernstein brings wah-wah trumpet into a New Orleans slow-drag version of the Beatles' tune, "Girl." On the insistent shuffle "Sing Sing," Peter Hess overdubs an entire reed section which murmurs underneath the group. He also contributes a raucous baritone sax solo as Ulrich rolls out a low, strummed melody while Hall and Lion roll along.

Big Lazy sounds like it had fun conjuring up all these flavorful sounds. Lion and Hall are invaluable in keeping the rhythms precise and tight as Ulrich spins his elaborate lines. There are similar instrumental combos around but these folks show more versatility than many of them. They can create music that would work well in some vintage western or road movie, as well as playing hot and frisky dance tunes.