The name Duane Eddy is synonymous with legendary. The most successful and influential instrumentalist in rock 'n' roll history, Duane Eddy blended his signature styles of blues, jazz and gospel, to develop a unique rock and roll sound. He used strong, dramatic, single-note melodies, combined with the bending of the low strings to produce a sound unlike anything ever heard before -- Twang.

“Duane Eddy was the front guy, the first rock and roll guitar god,” said John Fogerty. “Here was a guy who was laying down the template for how to get across to the public.” Duane's sound and musical influence has been prevalent over the past four decades, as he consistently broke new ground, producing over 25 albums and recording numerous tracks with artists such as Bob Dylan, Willie Nelson and Waylon Jennings. He garnered a Grammy Award for Best Rock Instrumental -- “Peter Gunn”, and a Grammy Nomination for Best Country Instrumental.

As if he hadn't accomplished more than a lifetime of achievements, Duane was inducted into the Rock and Roll Hall of Fame (1994), and his hit “Rebel Rouser” was used in the soundtrack for the timeless film Forrest Gump, while producer Oliver Stone picked up “The Trembler” for his film Natural Born Killers. Duane also joined Academy Award winning composer, Hans Zimmer, on the title song of the soundtrack of Broken Arrow, pieces of which were also used in the movie Scream 2.

Eddy, known as the “King of the Twang Guitar” and famed for such reverb-soaked rock instrumentals of the 1950s and '60s as “Rebel Rouser,” “Forty Miles of Bad Road,” “Ramrod” and “Peter Gunn.” The sonic template he created with producer Lee Hazlewood laid a foundation for the surf-music wave that crested shortly after he scored his first hits.

“Peter Gunn” made a return to the charts a quarter century after Eddy's original hit in 1960 when the British group Art of Noise recorded a cover version that featured its creator. That version won a Grammy as the best rock instrumental of 1986.

Eddy was born in New York and grew up in Arizona loving the music of movie cowboys such as Gene Autry and Roy Rogers as well as the songs of country music titan Hank Williams. He cites Les Paul and Chet Atkins among his key guitar heroes.

In the mid-'50s when Hazlewood took Eddy under his wing, the field of rock instrumentals was relatively open.

“There were a couple of instrumentals that had been hits,” Eddy, 71, recalled from a stop in Scottsdale, Ariz., earlier this week on his way to Los Angeles. “There was Bill Doggett's 'Honky Tonk' and Bill Justis had a hit with a record called 'Raunchy.' During Lee's years playing records, he'd really listened to them and dissected them, and knew what he wanted things to sound like when he got into the studio. I was doing some singing at the time, but he told me, 'Go write an instrumental,' and so I wrote 'Moovin' N Groovin'.”

That record reached No. 72 on the national chart, an impressive debut outing.

Like many musicians, Eddy finds the notion of retiring a foreign one. He's got a new album, “Artifacts of Twang,” slated for release this spring.

“If I had decided to do something else for a living,” Eddy said, “I'd still be playing guitar. Playing music is one of the most satisfying things in life.” Show less 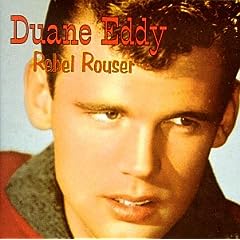 All About Jazz musician pages are maintained by musicians, publicists and trusted members like you. Interested? Tell us why you would like to improve the Duane Eddy musician page.