Dead Can Dance at Sava Center 2019 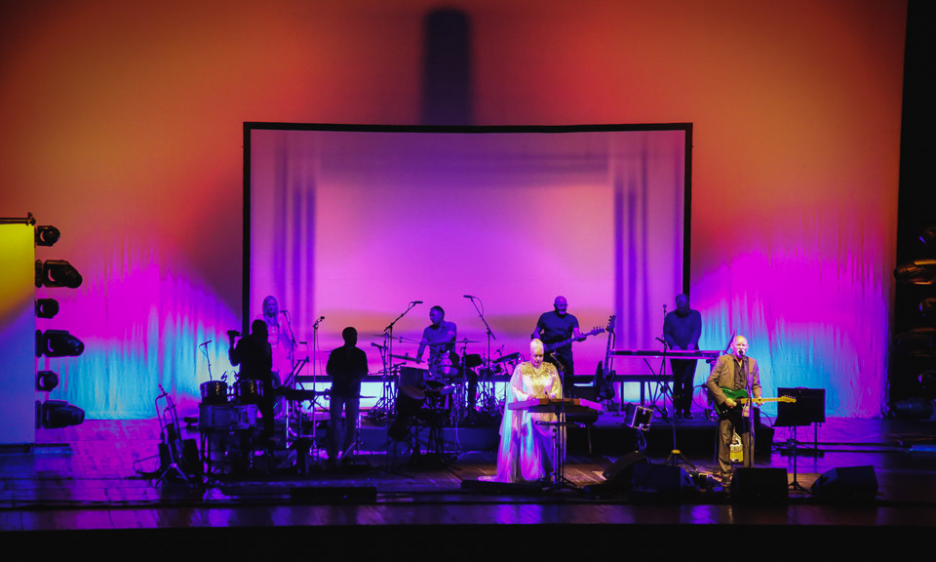 To classify Dead Can Dance only as a goth band would be like enclosing them in a disproportionate cage. Insufficient, inadequate and undermining. It would be fairer to describe this group led by multi-instrumentalist and vocalist Brendan Perry and vocalist Lisa Gerrard as an ever-changing ensemble that traverses ages, sounds, and geographies. Emerging from the post-punk era in the early '80s Dead Can Dance music has always been associated with many genres, including psychedelic rock, art rock, avant-garde, dark ambient, classical, medieval European music, world music traditions from all over the world. But it could be argued that Dead Can Dance is its own genre. Ever since the band released their debut in 1984 it has been known for their cinematic flair and constant pushing of the boundaries. Always keen experimenters and innovators, over the years, the band blossomed and expanded their music and tastes into various territories. They married a maximalist approach to minimal technology extracting enormous leverage from the imaginative use of various instruments, studio techniques and the incredible coloratura voice of vocalist Lisa Gerrard or Brendan Perry's deep and ruminative voice. Even the last album Dionysus was a beguiling combination of impeccable and imaginative craftsmanship and warmth capable of scaling heights only few could match.

And this year, DCD decided to hit the road with performances throughout Europe where instead of presenting the material from the last record they decided to do a setlist that celebrated every stage of their illustrious career including Dionysus. Thus this tour titled as "A Celebration Life & Works 1980-2019." Going to see Dead Can Dance perform in Belgrade, Serbia is a bit like visiting an old friend who you haven't seen in a long time. DCD has a formidable live reputation even though you don't often get to see them perform very often these days as its band members release albums every now and then and then tour in support of it. But the gaps extend to several years. And the prospects of seeing the band performing for the first time is equally exciting and comforting when the band takes you on a trip. The Sava Center Concert Hall is perfect for indoor concerts of this capacity and this time it was packed full. The crowds that gathered were coming from different corners of the Balkans region as this was the band's last leg of the tour with few stops in Bulgaria and Greece ahead.

There was something ceremonial in Dead Can Dance demeanor as they quietly entered the stage that was dimly lit with unobtrusive visuals in the background. And for the next two hours, the band embarked on a voyage that was simultaneously geographical and spiritual and their music touched on music ancient, modern and exotic. Their career-spanning set was designed to showcase the group's inspired music through the ages and also to prove that they still have the tools.

They kick off with the "Anywhere Out in the World" with Perry's voice and a myriad of harmonies engulfing the hall. This was such a dramatic entrance that both Perry and Gerrard reflected a not-of-this-world aura. The group kept their movements to a minimum without any communication with the audience and ceding a majority of the physicality to the arrangements themselves including the visual gestures where apart from playing the instruments and certain gestures. Then they launched into playing songs from the band's earliest stages such as "Mesmerism," "Labor of Love," "Avatar" and "In Power We Trust Love Advocated." The band even dig deeper into its vast catalog and came up with rare jewels such as "Bylar" a mesmerizing and playful song. Lisa Gerrard's inimitable voice was sending beautiful melodic waves across the Sava Center Hall and enveloped the arrangements in a majestic way. This is a great song and it appearing on the set was unexpected yet it was fantastic. Many of Dead Can Dance's compositions offer up a striking, almost haunting spectrum of sound and "Bylar" was no exception. Her ethereal and angelic voice soared over the music and she sang long and extended notes that emphasized the melody. This was followed by their classic song "Xavier" from Within the Realm of the Dying Sun.

The setlist had a wonderful flow with its inner and outer dynamics and as a result, it provided a more colorful and diverse feel throughout. As the show moved onward so did the choice began featuring more known songs such as "Sanvean," "The Hand that Shook the Barley." While often impressive during these musical excursions into the back catalog, it was the performances of the group's best-known songs such as "Yulunga (Spirit Dance), "The Carnival is Over" and "Host of the Seraphim" that this troupe shone brightest and seemed to connect emotionally with the audience. By the time they reached the end of the show with "Dance of the Bacchantes," there was a sense of an unfettered celebration about this show.

It was enlightening to reflect on how impressive each diverse stage of Dead Can Dance's career has been—and how expertly it was delivered that evening. Dead Can Dance is an astonishingly tight live proposition, almost eerily precise: if you close your eyes, you could be hearing an LP. And the audience wouldn't leave the band to leave and they returned several times for several encores during which they performed a cover of Tim Buckley's "Song to the Siren," "Cantara," "The Promised Womb" and "Severance." The two-hour-long performance truly conveyed a majestic spirituality associated with ceremonies. Nearly every aspect of the concert assumed the guise of a sacred ritual. But all of these descriptions and words paled in comparison to the immersion of the experience, which occurred on every level—emotional, spiritual and physical. It was a triumph of great artistry, timeless songs, art, life and a reminder of Dead Can Dance's staying power.

About Dead Can Dance