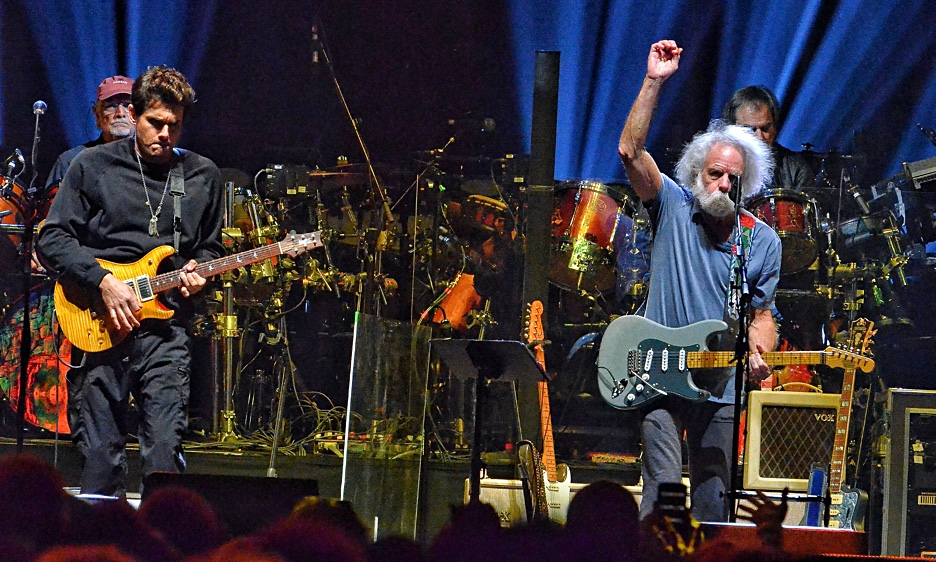 With the former Nassau Coliseum smelling like a mixture of pot, patchouli and incense with the vast majority of the attendees wearing something featuring tie-dye colors, the latest incarnation of the Grateful Dead, Dead & Co. took the stage and delivered a concert that had the multi-generational audience dancing, acting out the tunes and having a mellow-good time.

For those who may not be aware, Dead & Company is a band consisting of former Grateful Dead members Bob Weir (guitar), Mickey Hart (drums), and Bill Kreutzmann (drums), along with John Mayer (guitar), Oteil Burbridge (bass/drums), and Jeff Chimenti (keyboards). The genesis of this particular band revolves around Mayer. In early 2015, Mayer was the guest host of CBS' The Late Late Show. Mayer invited Weir to join him in a studio performance. The two guitarists hit it off and by August 2015, Mayer and Weir, Hart, and Kreutzmann had formed the band. The unit was complete when Chimenti and Burbridge joined. Dead & Company's initial concert was supposed to be a one-off performance, a happening, at Madison Square Garden on October 31, 2015. The show was so successful that a full tour followed shortly thereafter. Other tours followed in 2016, 2017 and 2018. At present, the 2019 tour includes dates in the U.S. and Mexico.

On a pleasant, early-November evening in Uniondale, NY, Dead & Company performed before a sold-out audience and delivered a show that pleased both the die-hard and casual Grateful Dead fans. Prior to when the band appeared on the stage at approximately 8:30pm, the venue was abuzz with anticipation. A Dead show is a happening. The set lists flow and are never the same as that from the previous show. Fans were heard discussing how deep within the legendary jamband's catalogue would the players reach and what would ultimately be part of the evening's set-list. Small groups had formed around the merchandise table where the tie-dye t-shirts, memorabilia, posters and other concerts shirts were flying off the shelves.

The concert began with the band performing the classics "Jack Straw" (in all of its jamming glory) and "Deal." The band was content to just play. There was little to no banter during the first set which also featured "Peggy-O," "Brown-Eyed Women," "Looks Like Rain," and the strong first set closing tunes "Cumberland Blues" and "Casey Jones." The members of the audience couldn't have cared less about the banter or lack thereof. The fans were there to dance, sing along, meet-up with old friends and to revel in the Grateful Dead vibe. After "Casey Jones," Weir announced that the band would be taking a short break, but would be back in a short while for set two.

After a short intermission, the band returned and opened the set with "Here Comes Sunshine." What followed was an extended jam that flowed from "St. Stephen" to "The Eleven" to "Comes A Time" to "Goin' Down the Road Feelin' Bad" to "Drums" to "Space" to "The Other One" to "Stella Blue" and finally into "Not Fade Away." In true Grateful Dead form, each couplet was an extended jamband masterpiece. The encore was an extremely appropriate choice. It was Election Day and naturally the band closed the performance with a raucous and rowdy version of "U.S. Blues." This version of the song, originally released on 1974's From The Mars Hotel (Grateful Dead Records), knocked it out of the park and had every member of the audience out of the seats and on his or her feet.

The performance was sturdy, strong and even though the set-list was different from that of the show at New York City's Madison Square Garden only a few nights prior, there weren't many surprises. The show consisted of a mix of Deadhead favorites that was sure to please. With such a huge canon of songs, there were bound to be some tunes omitted. On this night, one fan was heard lamenting the lack of the anthemic "Truckin,'" "Tennessee Jed," "Friend of the Devil" and "One More Saturday Night." But as another fan succinctly pointed out to him, "Dude, they can't play everything. Be thankful for a killer 'U.S. Blues' and that great version of 'Jack Straw.' Maybe they'll play them tomorrow night."

The performance was fantastic, loose and fun. In addition to Weir's strong vocals, Mayer's stellar guitar work (on which he channeled the late Jerry Garcia) and the fantastic performances by the band as a whole, the evening was highlighted by good cheer and the genuine affection the audience members had for the band members and the music.