By Woodrow Wilkins
September 5, 2010
Sign in to view read count 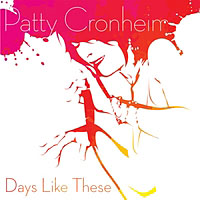 It started during a sing-along in the family car; little Patty Cronheim broke into harmony. The seed was planted, and now the vocalist is in full bloom. Drawing from a variety of influences in pop, jazz, blues and South American styles, Cronheim has released her first recording as a leader, Days Like These.

Cronheim has opened for Ray Charles, and performed some of her original music on television's Jane Pauley Show. She's a frequent guest of the Princeton University Jazz Ensemble, and has played around the northeastern United States.

"Estando Aqui," one of seven Cronheim originals, is a lively samba, with English and Brazilian Portuguese lyrics, delightfully backed by the rhythm section. In English, the title means, "Here I Am."

"Don't Work Anymore" is reminiscent of the Frank Sinatra/Mel Torme style of swinging jazz vocal. Cronheim sings, "Can't believe all that I hear, it's only thunder in my ear, trying to make me disappear. Just don't work anymore." Trombonist Clifford Adams and tenor saxophonist Greg Wall solo Brian Glassman's cool bass line, supplemented by pianist Aaron Weiman and drummer Corey Rawls, who are all but muted; softening the backdrop to a bass solo that sets up Cronheim's return.

The band delivers a blues-jazz rendition of Stevie Wonder's "Superstition," where Cronheim employs some subtle inflections as she shifts from verse to chorus. After the final verse, Cronheim and band build intensity before closing this selection.

Although Cronheim does dip into The Great American Songbook, it's refreshing that the session is comprised mostly of original songs. At times, it seems is if every up-and-coming artist must do songs like "Summertime" and "Bye, Bye Blackbird." But Cronheim's treatment of "Superstition" takes a few, bold steps off the beaten path. And the fact that she does it with an arrangement by Rawls keeps it fresh, and helps set Days Like These apart from typical vocal debut recordings.