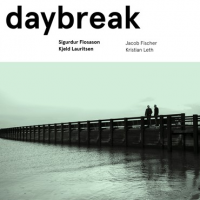 They used to call this kind of thing "mood music." The idea was to put the listener in a particular mood, usually one of calm and relaxation. When it came to jazz, the US label Prestige climbed on the bandwagon with a whole series titled—wait for it— "Moodsville."

Moodsville aimed at providing jazz that was "beautiful, poetic and thoughtful."

Flosason says the music has nothing to prove. "It simply is, neither old nor new, complex nor simple. In a way it is the core and the essence of all music: rhythm, melody and harmony in their barest and truest form—just music."

"The Night We Called It A Day..." "Blue Moon..." "Dreamsville..." One dreamy ballad follows another until, with Rodgers and Hammerstein's "Oh, What A Beautiful Mornin,'" the sun finally rises.

Two numbers stand out, both by Duke Ellington. "I Like The Sunrise" was part of his "Liberian Suite," written in 1947 to celebrate the African nation's centennial. It was originally furnished with trite lyrics delivered in his inimitably pompous way by Al Hibbler.

We are spared them here as Flosason breathes new life into one of Ellington's less distinguished tunes, followed by a fine solo with calypso leanings from guitarist Jacob Fischer.

"Morning Glory" was written by Ellington and trumpeter Rex Stewart in 1940 and recorded by the Ellington band just once. After a rather wooden opening by Lauritsen, Flosason and Fischer deliver excellent solos.

Sandwiched between the two pieces of Ellingtonia is a very nice version of the Sigmund Romberg/Oscar Hammerstein number "Softly, As In A Morning Sunrise" from 1928.

Again, the organ intro is a trifle stolid but Flosason quickly lifts the number and Lauritsen redeems himself with some nicely understated, swinging work before close of play.

The Night We Called It A Day; Blue Moon; Dreamsville; You Stepped Out Of A Dream; In The Wee Small Hours Of The Morning; I Like The Sunrise; Softly As In A Morning Sunrise; Morning Glory; Oh, What A Beautiful Mornin’.

About Sigurdur Flosason and Kjeld Lauritsen