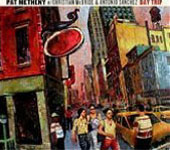 Although Pat Metheny gets top billing on Day Trip, this is not a one-off superstar meetup, a la 80/81 (ECM, 1980), Question and Answer (Geffen Records, 1990), and I Can See Your House from Here (Blue Note, 1993). Metheny has toured with Christian McBride and Antonio Sanchez, on and off, for the past few years; on Metheny's Web site, the group is called the Pat Metheny Trio. Nonesuch may have billed Day Trip the way it did, in order to avoid confusion or backlash. While confusion might have ensued, any backlash would have been minimized by the outstanding performances on this enticing disc.

"Son of Thirteen" launches Day Trip on an up-tempo note, but instead of hitting it at flag-waving volume, the group chooses to focus on detail and intimacy. Sanchez is busy as all get out, bringing depth to the piece as he bubbles under Metheny's impeccable guitar and McBride's sterling foundation. Sanchez' solo at the end of "Thirteen" builds and builds over Metheny and McBride's comping until you think Sanchez will burst; and yet, Sanchez resists sending the piece's nuanced attack off the tracks.

This trio is certainly capable of turning it up to 11, as it does on the reggae-rocker "The Red One." There's even a sighting of Metheny's dreaded synth-guitar on the bluesy, urban "When We Were Free." But those moments wouldn't be as powerful as they are if the band had cranked it on every cut. Sanchez' booming solo on "Red" is a definite crowd-pleaser, but it's even better because he chose only to intimate that power earlier in the disc. "Let's Move" is even more aggressive than "Thirteen," thanks to its complicated, split-second time changes. But because the band isn't hitting the listener over the head, the tune's content can be better appreciated.

Despite the date's impressive group aesthetic, there are good reasons for putting Metheny at the top of the bill: Aside from the fact that he does his best Wes Montgomery on the lion's share of the solos, all the music comes from Metheny's pen, and the compositions are some of his best. "Snova" is a lilting bossa that evokes Charlie Byrd's work with Stan Getz; the spiritual "Is This America (Katrina 2005)" puts the after-effects of this country's biggest natural disaster into stark relief, and if Metheny's emotional acoustic guitar doesn't get you, McBride's mournful bowing will do the job. As always, McBride shines like a beacon. His sliding solo on the sauntering "Calvin's Keys" is nothing but fun and his break on "Dreaming Trees" is marvelously lyrical.

For better or worse, Metheny will never get completely away from the Pat Metheny Group; its footprint—and its fan base—is just too big. Those fans may see Day Trip as just another side project. However, given the exceptional results Metheny has achieved with this new musical partnership, Metheny might be tempted to make this vacation from PMG a little longer than usual.