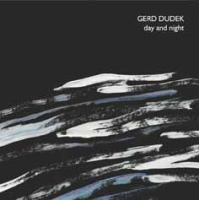 When saxophonist Evan Parker started his Psi label back in late 2001, the label's second release—following his own solo album, Lines Burnt in Light (2001)—was the excellent 'Smatter (2002), by Gerd Dudek, the German saxophonist's first release under his own name. In January 2012, when Parker curated a week-long series of concerts at The Vortex in London, entitled "Might I Suggest," Dudek was one of several excellent German musicians invited to participate (along with the estimable Rudi Mahall, Axel Dorner and Alexander von Schlippenbach, among others). Dudek played with a trio also featuring German-born, London-based pianist Hans Koller, receiving a rapturous welcome from the enthusiastic audience.

The day after that concert, the four headed to Curtis Schwartz Studio, in the Sussex countryside, to record this album. As with 'Smatter, which also featured a quartet (albeit with guitar, not piano) playing six straight-ahead compositions, for Day and Night Dudek and Koller chose eight of their favorite tunes for their group. They clearly have excellent taste, and selected a mouth-watering program including pieces from saxophonists Ornette Coleman, John Coltrane and Wayne Shorter, bassist Charles Mingus and pianist Herbie Nichols, and alongside two by London's own Kenny Wheeler and one by Bach.

That material is perfectly chosen to showcase Dudek at his best. All the pieces have strong melody lines that are played beautifully—notably from memory, according to von Schlippenbach's sleeve notes. Koller, bassist Ollie Hayhurst and drummer Gene Calderazzo are a match for Dudek, mainly supporting the saxophone and framing it to best effect; they occasionally solo, but otherwise they leave Dudek firmly in the spotlight. Everything about Dudek's playing is enviably flawless; as ever, his tone is full and rich, whatever speed he is playing at. When improvising, seemingly with consummate ease, he fluidly spins out fresh melodic lines without a cliché in sight, extracting every possible ounce of emotion from each composition.

In the end, Dudek is so good that it can be difficult to avoid hyperbole. So, in his sleeve notes to 'Smatter, Parker said, "Gerd is a holy one. Music incarnate, an Adolphian centaur—impossible to say where the body and the saxophone separate." Von Schlippenbach is just as effusive in his sleeve notes for this album, saying, "Dudek is the Chosen One, blessed by the Lord in his sleep, indeed.... when he's imp(a)rovising lines, way out, with beauty, and so refined, we hold our breaths as one and listen, leaning in: a halo is deserved by him!"

Even those without religious beliefs will find it difficult to argue with such sentiments. Every track here is so good that it is impossible to single out any one as the best, but altogether Day and Night is one of the very best albums of 2012.