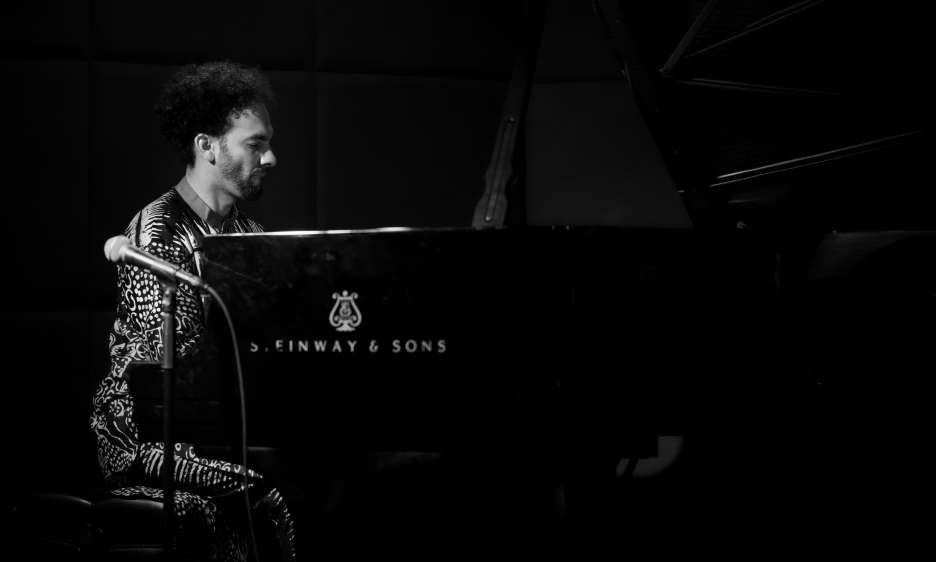 Since touching hallowed ECM ground in 2013, pianist David Virelles has opened minds of listeners far and wide. Despite the expansive reach of his art, however, the experience of hearing it live is nothing if not inward. Joined for two nights at Jazz Standard by percussionists Román Díaz and Keisel Jiménez, along with bassist Rashaan Carter, Virelles proved that at its core improvisation is about getting in touch with your own.

Dampened block chords set the tone for an evening of honest unraveling. Every note spilling from his Steinway seemed to lead us underground, where darkness was punctuated by beating and bassing. Occasionally Díaz broke the spell with splashes of bells, luring the audience away from the temptation of fantasy and into vivid reality. Such catharses were peppered throughout, each a signpost along the path toward parsing the quartet's spiritual grammar. Theirs was indeed a cosmic impulse made flesh, glorified in chants and other intimate rituals. Expectations were thus challenged at every turn. Rather than coalescing from hints and fragments, grooves fell as if from cloudy skies like the voices of souls whose language is knowable only to the initiated.

Even in light of these ephemeral associations, Virelles's playing was resolutely tactile. He was the hardworking heart, a living reminder that instruments are comprised of the same minerals and atoms from which our bodies are spun. Even at rest, his energy was kinetic and forward-seeking. Although grooves were never ends to a means, whenever he did guide the band into head-nodding territory, it was only to underscore an inescapable mortality. Every time Virelles laid a field, Jiménez and Carter would chase the setting sun across it, erasing a path even as they drew it. They did so not to kill the future but to revive ancient days. Any symmetries existed only to be broken, as when shades of montuno convention left the frame just as quickly as they entered it.

Yet it was Díaz who punched our guts in the most loving way possible. He was a force among forces, restoring equilibrium by his very presence, made whole by acceptance of life's retrogression. He spoke in poetries of elemental division and congruence alike. His quest sought no answers, because no questions needed to be asked. All the more appropriate, then, that no titles were announced, for none would've held purchase anyway in the palimpsest of our hearts. These brothers in resonance felt everything before they played it, and played everything only as they felt it. This was music of the marrow.