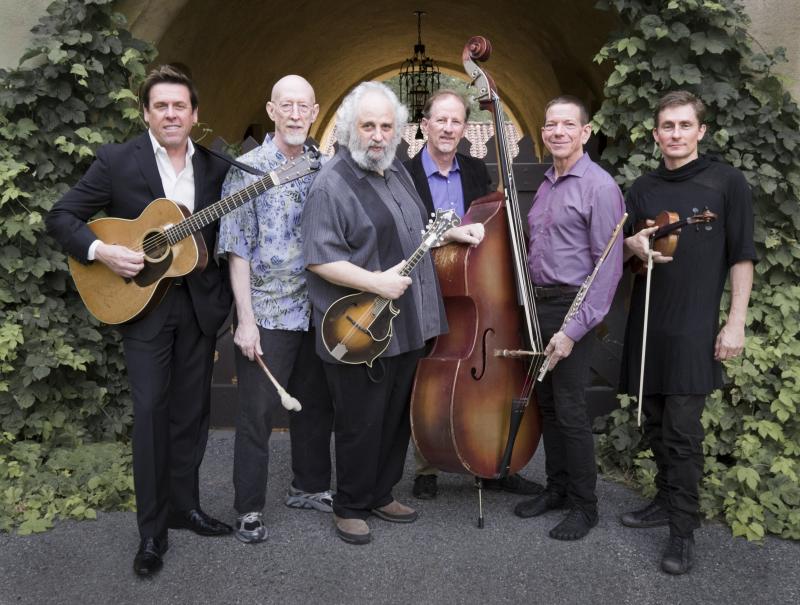 Wag More, Bark Less. That's a popular bumper sticker, but it could also be a theme, a motto, a catch phrase or even the guiding philosophy for the David Grisman Sextet whenever it unleashes its very own "Dawg Music." Friday night at the Chautauqua auditorium in Boulder, there was no barking. And if the musicians had been lucky enough to have tails, the wagging would have been constant, ubiquitous, relentless. The breeze from all the wagging would have rearranged hairdos throughout the theater. The wind chill factor would have plummeted. The wagging wind would have tested the structural integrity of the aging auditorium. The audience would have been blown away.

Perhaps much of the audience was blown away anyway. Even without tails. Grisman has been playing Dawg Music for 40 years now and much of the audience appeared to have been following it for much of that time. The kind of happiness and enthusiasm our canine friends express with their tails was channeled through various acoustic instruments by this band of virtuosos. Some band members were in Grisman's demographic, but the leader made sure to inject some younger blood into the dawg pound. Bassist Jim Kerwin, drummer George Marsh and flutist Matt Eakle have been around the block and spent many years, tails wagging, with Grisman. Younger and newer members to the group included Chad Manning on fiddle and George Cole on guitar.

Dawg Music is something Grisman dreamed up back in the 70s. The basic concept mixes bluegrass with jazz and throws in elements of blues, country, folk and other influences. In the early years, the band was strictly strings. The current version of the sextet adds drums and a flute. And the band is strictly acoustic. The only instrument with a telltale tail, er, uh, cord emanating from it was the acoustic bass, giving away the presence of an electronic pickup lurking somewhere within. All the other musicians simply snuggled up to their microphones for a clean, purebred sound.

Grisman started as a bluegrass player and that genre is ever present in Dawg Music. However, Friday night a jazz sensibility nearly always provided a solid, swinging foundation. (Is it possible to be both solid and swinging at the same time? Of course! This is music, not engineering!). Dawg Music is a blend of the city and country; the urbane sophistication of jazz mixed with the down-home pickin' and grinnin,' sitting-on-the-front-porch-with-no-shoes, unpretentiousness of bluegrass. The dogs dug a hole under the fence and bolted for the wide open spaces.

Perhaps the best sonic example of the union of the country cousin and the city cousin was in the playing of the flute and fiddle. Although the violin can trace its origins to Europe and western classical music, the fiddle has traditionally been a cornerstone of country and bluegrass music. It, along with the steel guitar, are icons of the genre imparting the twang so necessary to music from the farm, the ranch, Appalachia. In the right hands, the fiddle easily sheds its uptight tuxedo attitude and grabs a piece of straw to chew on. The flute, on the other hand, as a member of the woodwind family, never has mud on it shoes, doesn't drive a pickup and has never been known to use the word "ain't." So Friday night, when these two instruments played in unison or soloed back to back, the contrast jumped to the fore. It was a bit like a Cadillac pickup truck, designer jeans with holes, a champagne and moonshine cocktail. Well, some of those combinations may work better than others, but the flute-fiddle interface justified some serious wagging.

Grisman was a chatty front man. Seemingly every song had a story and usually the story involved one or more giant musical personalities. True to form, the personalities haled from many different corners of the music world. Not surprisingly, Grisman talked of bluegrass and country personalities frequently; folks he had had the honor of working with such as Doc Watson, Del McCoury and Bill Monroe, the father of bluegrass. He also spent a fair bit of time with Jerry Garcia and Friday night the band played "Grateful Dawg" in his honor. Grisman told a story of playing Denmark years ago when he noticed a well dress man in the front row whom Grisman thought might be a newspaper reporter. Between sets, the gentleman came backstage and introduced himself as Svend Asmussen, the great Danish violinist/fiddler. Grisman invited Asmussen to come to the US to play with his band and he later did. The tribute song to him Friday night was "Svingin' with Svend." Asmussen, by the way, is still with us, having turned 100 last February.

The encore was particularly poignant for the Boulder audience. Grisman had been friends with Charles Sawtell, a well-respected and beloved guitarist of the local bluegrass unit Hot Rize. Sawtell passed away in 1999. Hot Rize played (and still does when it gets back together as, happily, it does periodically) fairly traditional bluegrass music. However, they do a shtick in the middle of their shows where they change costumes and come back on stage as Red Knuckles and the Trailblazers and play old-time country music. The band members adopt different personas and names. Sawtell's alter ego was "Slade." And so, Grisman's musical tribute to Sawtell also took that name. Although the tune was a tribute to a dear, departed friend, the tails throughout the auditorium wagged anyway.

Geoff Anderson digs jazz in the Denver area, is a DJ Tuesday nights from 8 to 10 MT on KUVO; kuvo.org.