David Bowie: The Rise and Fall of Ziggy Stardust and the Spiders from Mars (40th Anniversary Remaster)

BY NENAD GEORGIEVSKI
July 21, 2012
Sign in to view read count 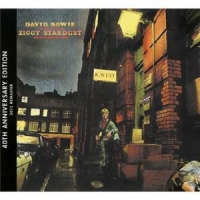 Only a handful of musicians have embraced the countless changes of style, character and musical directions that singer David Bowie has. In a career that spans over four decades, he managed to retain the essential ingredients that have made him what he is today: a legend. No wonder he is seen as part of the Holy Trinity with The Beatles and the The Rolling Stones. Despite his vast influence and perennial popularity, Bowie still remains one of the most elusive figures in popular music. One of his main features has been the changes that have proven to be his life's blood, ever since he began his career. His musical personas (or the musical metamorphoses) that have included Major Tom, Ziggy Stardust, Aladdin Sane, the Thin White Duke and the Berlin émigré were indications of Bowie's evolution; not only was he changing but he changed the world around him.

All of that began with The Rise and Fall of Ziggy Stardust and the Spiders from Mars, possibly his most important album and the record that set Bowie on a course to become one of the best known pop stars on the planet. This 40th anniversary box is being issued in several formats, with 2012 re-mastering done by original Trident Studios engineer Ray Staff. The limited edition vinyl format is also being issued with a 5.1 mix and the high resolution audio DVD has previously unreleased mixes of several songs by producer Ken Scott.

An instant classic when it was released on June 6, 1972, it comes with an abundance of analysis, praise, expectations, mythology and hype 40 years later, as is often the case with such works of art. Prior to this record, Bowie was a mercurial musician struggling to be more than a one-hit wonder with Space Oddity (RCA, 1969), despite the slew of good records that followed it. The beginning of the '70s marked a highly productive period: besides working on his own music, Bowie and guitarist Mick Ronson coproduced Lou Reed's seminal Transformer (RCA, 1972), mixed The Stooges' Raw Power (Columbia, 1973) and wrote for others, including glam rock anthem "All The Young Dudes," for Mott the Hoople in 1972.

From the moment he sketched the concept for the character of Ziggy Stardust while finishing Hunky Dory (RCA, 1971), and until he announced the death of this fabrication, as famously seen in the concert film shot at the London's Hammersmith Odeon, Bowie developed one of the most legendary alter-ego personas in the history of rock music during the golden era of concept albums. The album's songs, starting from "Five Years" through "Rock 'N' Roll Suicide," are all well-known. The disc is packed full of semi-precious stones, where the concept is vaguely alluded to, despite the songs not being linked in any coherent fashion. But the detailed story of the androgynous space-rock messiah—backed by his imaginary band of guitar legend Mick Ronson, bassist Trevor Bolder, drummer Mick Woodmansey—was explained in detail in an unusual interview with writer William Burroughs, for Rolling Stone in 1974.

By his own admission, Ziggy Stardustwas intended to be a painted nothing, an android from another planet who recognized rock solely as an exchange of energy in the rubble of a doomed metropolis. Crafted by his subversive imagination, the character and the story were sourced from different real and imaginary characters, most notably Vince Taylor, the long forgotten crazed rock and roll star, Iggy Pop of the Stooges, guitarist Jimi Hendrix and plenty of others. This record was a meeting point of Bowie's widespread interests in theater, dance, pantomime, kabuki, cabaret and science fiction. All of this was delivered with rock 'n' roll from outer space, high-heeled boots, multicolored dresses, extravagant makeup and outrageous sexuality. Above all, Bowie's means and methods of articulation also revealed an artist with a subversive sense of humor—and a master chess player. He skillfully manipulated the media by countering the stereotypes of the day in order to disperse the subversive features of his alter ego. Subsequently Bowie said he wasn't surprised that Ziggy Stardust made his career. He packaged a totally credible plastic rock star—much better than any sort of Monkees fabrication. His plastic rocker was much more plastic than anybody else's.

In England, the album and the tour had much to do with kick-starting the "glam-rock" era. It influenced the new romantics and the punk generation and the alt rockers and techno musicians of the 1990s. Neither singer Bono and U2 nor Radiohead would have reinvented themselves or invented characters were it not for Bowie. It is difficult to grasp the enormous influence that the singer's work has continuously had on culture across all these decades, as it spread so far beyond art, music, film and fashion. In the years to follow, Bowie's path would see many more metamorphoses, but this character would secure his place in the pantheon of the gods. The Rise and Fall of Ziggy Stardust was a milestone record in 1972 and, forty years later, it remains one of Bowie's most influential and far-reaching accomplishments.