David Bowie: The Next Day

By Nenad Georgievski
March 24, 2013
Sign in to view read count 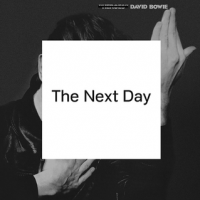 The role of the artist is to deepen the mystery, Francis Bacon once said, and singer David Bowie is a master of that. After several years of studio and especially media abstinence, Major Tom has surprisingly reported for active duty when he released his first single in ten years, "Where are We Now?," coinciding with his 66th birthday. That broke the years of silence and speculation, and the news took over the world in a storm as if it was announcing the Second Coming. Evidently, Bowie is a master of many other things, including a master of musical reinvention and a master of music marketing and self-promotion. His is certainly one of the boldest careers of a single artist in the history of pop/rock music, a figure that has stayed constantly ahead of the game for the last four decades.

When the first single landed unannounced he managed to capture people's imagination without the usual fanfare that accompanies the release of most singles by other artists, young and old. "Where are We Now?" is a gorgeous, touching ballad carried by atmospheric guitar strums, lush strings and a florid piano much in the manner of, but not resembling—"Thursday's Child" from Hours, (Virgin, 1999). Lyrically, it makes evocative references to his famed Berlin period with a sense of drowning nostalgia. And with a storied career such as his people would look for hints and references from the past including comparison to his past achievements. Firstly, there's the cover of the glorious "Heroes" (RCA, 1977), but obscured with a white square over it. Secondly, there's producer Tony Visconti, who produced most of the '70s oeuvre as well as Bowie's last two studio efforts Heathen (Columbia, 2002) and Reality (Columbia, 2003). And it's these contrasts of ideas and references that Bowie thrives on and because of that he has never been that easy to interpret or pinpoint.

Bowie's The Next Day is neither recycling of the past nor easily comprehensive music. As someone whose sanity and vitality has depended on a constant diet of new, mind-stretching experiences, these ventures have fed his work for ages and The Next Day is not an exception. As the front cover's designer Jonathan Barnbrook explained, the obscured cover was meant to signify the spirit of great pop or rock music which is "of the moment," forgetting or obliterating the past. Musically, it continues where he stopped with Reality from a decade ago. Although the youthful urgency of his early records is long gone, this may be his rockiest and grittiest album since Earthling (BMG, 1997) or the Tin Machine days. The band that joins him on this record for most part are associates that were part of his recording and touring band from his previous projects.

One cannot accuse Bowie, even in his 66th year, of pandering to the masses. It is a puzzling record that doesn't easily reveal its secrets. Each track is a gem that punches its weight. Apart from the first single and the closing "Heat," most of the songs are punchier and rockier that are unified by Bowie's characteristic eccentric sense for melodies. "Valentine's Day" has that same playfulness and the harmonic similarities that "Seven" (from Hours) and "Everyone Says Hi"(from Heathen) have. Lyric wise, the songs are difficult to decipher, but they bubble restlessly with lyrical energy and a plethora of references and imagery. The title song and the album's second released single, "The Stars (Are Out Tonight)," are more upbeat and moody rockers. The sense of uneasiness prevails for most part and this dense and complex music is full of rich, tonal undercurrents. "How Does the Grass Grow?" and "I'd Rather be High" are propelled by a primal, brooding attack of guitars, pulsating basses and marching snares.

As a whole The Next Day sounds complex and angry. It is a very song-oriented album with each track moving forward and developing. It is a stimulating synthesis of songs and abstract sounds that simultaneously sound cacophonous and trashy, but not disoriented, experimental yet familiar. For years Bowie has been jumping from record to record with different concepts and sounds. What binds those albums together, regardless of concept and people playing, is his boundless energy. The Next Day is a great record and a real comeback that won't change the fact that Bowie remains the elusive white duke evading both critics who try either to bury or predict his career and the expectations of the general public.

The Next Day, Dirty Boys, The Stars (Are Out Tonight), Love Is Lost, Where Are We Now?, Valentine's Day, If You Can See Me, I'd Rather Be High, Boss of Me, Dancing Out In Space, How Does The Grass Grow?, (You Will) Set The World On Fire, You Feel So Lonely You Could Die, Heat