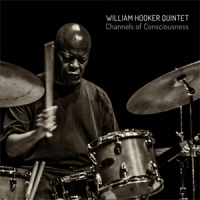 Drummer William Hooker was a mainstay at New York City's downtown jazz haven The Knitting Factory, amid several cross-functional albums for its record label. He's a freethinker, possessing a broad musicality, largely immersed in improvisation, and communicates a comfort zone whether tackling or expanding numerous world music stylizations nestled within free-jazz, avant-rock and other genres. Recorded at Roulette in New York City, Channels of Consciousness is a passionate endeavor, where the quintet aggregates garrulous free-jazz, blues, and fluctuating asymmetrical structures during the free-form jazz pieces.

"Lower Interlude" is in fact, a program interlude, featuring Hooker's duet with percussionist Sanga. And rather amazingly, his complex African tom rolls sound like he's using a monstrous drum-kit. Such is not the case, as he performs his majesty on a scaled-down 5-piece. But with intense tradeoffs, the musicians prompt responses and push each other to the perimeter of physical limitations. No quivering or hesitation here, as the artists whirl through a parade of Afro-Cuban grooves, sparking feverish treks to lofty pinnacles via their polyrhythmic aplomb. Moreover, Hooker intermittently shouts oral cues as the duo surges forth with a stream of consciousness that is resolute and trancelike. Indeed, they push the envelope and perform with a sense of conviction, perhaps implicating that the human spirit can overcome all obstructions.