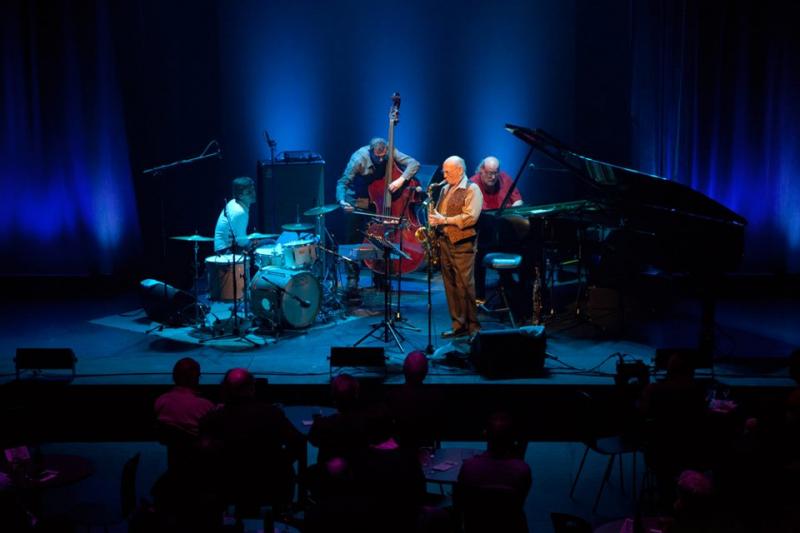 Saxophonist Dave Liebman is known to have played the length and breadth of the jazz world, on both sides of the Atlantic, in both hemispheres, and, having done so for nearly 50 years, it is impressive that he is still able to find novelty and innovation in every performance. As his record testifies, his name is synonymous with virtuosity and also humility, as he devotes himself to educational work in equal measure to performance.

His accompanists at the April Jazz Festival, the annual and frequently chilly season starter held in the western suburb of the Finnish capital of Tapiola, have been equally active in educational and virtuoso performance, primarily in the European context and particularly in their native France. In the trio that bears all members in equal ranked order, pianist Andy Emler plays the leading compositional role alongside the hardened rhythm duo of bassist Claude Tchamitchian and percussionist Eric Echampard. All three Frenchmen are prominent on the French modern jazz scene in various lineups, and have played with Liebman during his many sojourns in Paris.

For this first appearance together on Finnish shores the band played a selection of pieces drawing on the compositional skills of the three melodic instrumentalists. Emler's style is lush and rhythmic, in contrast to his supervisory role in his major project, Megaoctet. The rhythm duo is well-versed in all styles of performance, but really showed its strength on Liebman's "Master of the Obvious" and Tchamitchian's "Escale à Lhassa." Although all four musicians have often frequented Nordic shores, it was a joy to witness the essential faculty in modern jazz musicians of finding new shades of expression from their well-stocked palettes.

To any who see a schism between American and European styles of jazz, this performance showed how seamlessly they can blend, with Liebman's fluid and still surprising solos and the colorful Frenchmen's spontaneity matching each other in kind. Emler's "A Mind is Like a Parachute," its title taken from a Frank Zappa quote, was testimony, indeed, to the witty Transtlantic blend. And, intriguingly, it was at this rather remote northern European festival that Liebman chanced to meet his former adolescent mentor, saxophonist Charles Lloyd, for the first time in nearly 100 years of combined professional touring.