By GARETH THOMPSON
October 11, 2018
Sign in to view read count 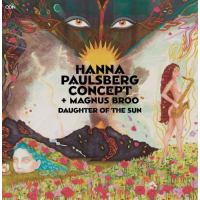 Fourteen centuries before Cleopatra, queen Hatshepsut became one of the few women to rule Egypt. Artworks at the time portrayed her with masculine muscles and a Pharaonic beard, but these icons were smashed to smithereens in Hatshepsut's burial chamber. Clearly she upset the male hierarchy back then. Three and a half thousand years later, this fourth album from Norwegian artist Hanna Paulsberg is dedicated to Hatshepsut and all women who fight for recognition.

Paulsberg's father was a jazz drummer, but his daughter only turned to the genre via a compilation featuring Stan Getz and Antonio Carlos Jobim. Straying from her Nordic roots, she began looking to America and Africa for inspiration.

Influences from both continents are evident on this sensual and sorcerous album. In a bid to stave off complacency, the band brought skilled Swedish trumpeter Magnus Broo on board. His force is felt on opening cut "Scent Of Soil"—the most affecting chunk of mysticism you could wish for. A heartbroken piano motif, the barest of sax breaths and a murmurous chorus enfold you. Dabs of double bass and Broo's trumpet then gradually ease the mood into something lucent.

Piano flurries and sax ricochets give each other free rein on "Little Big Saxophone," where the bass steps into a dubby jive. You might be thinking Roy Brooks circa The Free Slave (Muse, 1972) or the noted output of Strata-East record label.

Nordic folklore does make a bow on "Hemulen Tar Ferie," being named after a Moomin character. Tove Jansson left a feminist legacy in her troll stories and may have approved this piece with its rhythmic frolics, pining sax and impish keyboards.

Paulsberg and Broo are in satiny tandem on "Serianna" where a giddy melody sounds made for embracing strangers to. The composer's yen for township vibes feels strong here, reminding us Africa is "the continent whose diaspora made jazz possible" (Ted Gioia). Listen out for strains of The Jazz Epistles and Bayeté Umbra Zindiko nestled herein.

Throughout these six numbers there's a canny mix of the prayerful and joyful, so that neither tone ever quite dictates. The title track's lulling and tickling backdrop allows Paulsberg to remain elusive, firing stray arrows with her random licks. She then confounds us with a virile and searing solo, like Azar Lawrence, during "Bouncing With Flower Buds." An untitled closing piece flirts among traditional and free forms, merging old-time romance into Utopian chaos.

Near the end of her reign, Hatshepsut erected a pair of obelisks at Karnak temple. One inscription refers to "Those who shall see my monuments in years to come, and who shall speak of what I have done." Ingrained as we are to compare modern triumphs with past glories, Daughter Of The Sun could be a whole new touchstone of excellence.