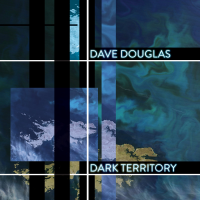 Dave Douglas's second release with his electronic group High Risk is true to form of the trumpeter's modus operandi to avoid repeating the same thing twice. While Dark Territory is of similar species to 2015's High Risk; it is a completely different animal. Shades of Miles Davis's azure tone permeate the project but there are also a menagerie of hues, shapes and rhythms reminiscent of trumpeter Rob Mazurek's eclectic works.

The debut's sweeping vistas are replaced with the warm breeze of "Celine" where Douglas's flourishing trumpet dances over a catchy vamp. Yet the waters get murky in "All The Pretty Horsepower" with peculiar noises: static, funky beats, sampled voices, and keyboards that morph into copacetic flow at the track's culmination. Tunes such as "Ridge Hill" are totally wild as the group works in a frenzied energy with Douglas's trumpet plugged in as well.

From art-noise to spastic dub tempos curious themes run the gamut with each track presenting something unique. While some work better than others the common thread is Douglas's strong lead playing in a sonic ocean of changes. Jazz purists will probably not change their minds about High Risk's new electronic playground but Dark Territory is certainly an interesting excursion.