By EYAL HAREUVENI
February 24, 2012
Sign in to view read count 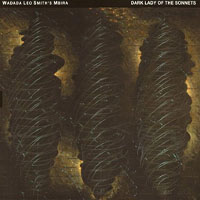 Every few years master composer and trumpeter Wadada Leo Smith surprises with a new outfit that fits wonderfully in his rich and complex musical universe. The Mbira trio is no exception: a timeless, multidimensional trio, inspired by revered ancestors but with its course set for a possible future. In this trio, Smith contextualizes the spiritual veins of the American school of free jazz, the Mbira (thumb piano) music of the Shona culture in Zimbabwe, and traditional Chinese music, all in a contemporary and highly personal language—and as usual, delivering a powerful and most beautiful human document.

His comrades are Min Xiao-Fen, a virtuoso on the ancient Chinese-lute-like pipa who has collaborated with forward-thinking improvisers such as Derek Bailey and John Zorn, and drummer Pheeroan AkLaff, who has played with Smith since the mid-seventies. Dark Lady of the Sonnets's release coincides with Smith's 70th birthday celebrations in December, 2011.

There are five thematic suites, composed specifically for this trio. The first, the bluesy "Sarah Bell Wallace," was written as a memorial for Smith's late mother. All elements of this trio gel organically: Smith's fiery non-metrical blowing; the ornamented textures of Xiao-Fen's loose theme; and akLaff's polyrhythmic base. "Blues: Cosmic Beauty" celebrates "the beautiful creation that Allah the Almighty made" in a number of dimensions, beginning with Smith and akLaff's energetic duet—both shifting between different pulses—until Xiao-Fen joins and begins a more meditative duet with Smith, who articulating his ideas with poetic richness and, later, adding spare vocals.

"Zulu Water Festival" was inspired by an image of 60,000 Zulus dancing near a quiet lake. It has a strong melodic theme, articulated by Smith and then echoed by Xiao-Fen in her most Chinese-sounding playing of the date, while akLaff engulfs their gestures with ceremonial drumming in the background. The title track is dedicated to singer Billie Holiday, "a voice larger than our world," as Smith writes in a poem of the same name, sung with an emotional, operatic voice by Xiao-Fen. The music was created for a dance ballet, and is sketched in contemplative and minimal lines, mostly as a subdued duet between Smith and Xiao-Fen's vocals and pipa that intensifies in its second part with the addition of akLaff. "Mbira" is the most complex and intense composition, also made for a dance ballet. It is a deeply ceremonial sonic journey structured in melodic unites that are connected in performance, demanding from each member of the trio to link his improvised element to the others improvised parts.

A masterpiece, from beginning to end.