By JAMES FLEMING
November 4, 2018
Sign in to view read count 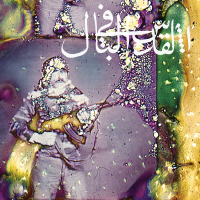 In a thrilling juxtaposition, the record's jagged synthesisers clash with its rolling rhythms. As the beats' hypnotic loops lure in the unwary the electronics buzz and chatter like insects at sundown. The swarming, shimmering sounds of evening's approach. On Daqa'iq Tudaiq (Constellation Records, 2018) Jerusalem In My Heart hold the avant-garde up to the Arabian twilight. And trace the sonic silhouette in the LP's grooves.

Side one's echoing, melismatic vocals float above the Middle-Eastern pulse. Coloured by an orchestra's swirling shades, the rhythm of "Wa Ta'atalat Loughat Al Kalam" sways like a pendulum. A hypnotic ocean-flow that runs through the first two parts of four. Heralded by ambient synthesisers, Jerusalem In My Heart's composer-producer Radwan Ghazi Moumneh counts in the tune in Arabic. A language that rolls easy from the stereo speakers in melodies as infinitely varied as the ostinati are repeated. Recurring riffs that carry the psychedelic vocals on their shoulders. Showing the listener the way through the avant-garde orchestrations.

Stuttering electronics dam the rhythm's flow. Part three of "Wa Ta'atalat Loughat Al Kalam" dives deeper into the avant-garde's whirlpool. Where Moumneh's synths butt against orchestrator Sam Shalabi's scores. The pulse remains steady. Defining the outlines of that twilit silhouette. But the layers of strings and synthesisers colour it with new and futuristic hues. "Wa Ta'atalat Loughat Al Kalam" is based on a popular Egyptian classic—"Ya Garat Al Wadi." But Moumneh and Shalabi have modernised it. Through their electronics and orchestrations they have placed a North-African classic in a contemporary context. And built a bridge between cultures in the process.

The original rhythm returns on Part 4 to move the record towards its second side. Where Moumneh explores modernity's outer realms. Just as Can did on the second disc of Tago Mago. The electronics bubble and throb on "Bein Ithnein." Anchored to a quiet, distant beat. The sounds of the buzuk—a traditional Middle-Eastern instrument -dance around that faraway rhythm. Spinning a sonic tapestry that tells of tradition's meeting with experimentation. Where the old meets the new. And unite to become greater than their sum.

As the B-side moves through the arrhythmic stop-starts of "Thahab, Mish Roujou,' Thahab" and onwards to the record's end of "Kol El 'Aalam O'youn," the bond between the Arabian music and the avant-garde strengthens. The two worlds send learning and creativity back and forth. And bolster the other's knowledge while expanding their horizons. As if that twilit silhouette has been placed on the rack. To stretch out its consciousness.

Daqa'iq Tudaiq is an electrifying listen. It wanders freely around the space between genres. Where the future lies. In a time where technology has closed the gap between lands and souls, the only obstacles are the imaginary lines drawn by our fearful past. While the news talks of Trump and Brexit, the people sing their songs. Making a music that transcends all our self-imposed, evolution-stunting hindrances.

About Jerusalem In My Heart