BY JOHN KELMAN
November 3, 2010
Sign in to view read count 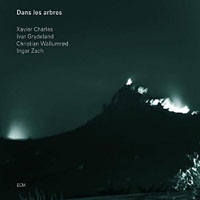 When French clarinetist Xavier Charles, pianist Christian Wallumrod, guitarist Ivar Grydeland and percussionist Ingar Zach appeared at Norway's Punkt Festival in 2007, they'd yet to take the name Dans les arbres, which would also become the title of this freely improvising unit's 2008 ECM debut. It's taken two years for the album to find Stateside release—anomalous for a label that has, in the past, seen some significant gaps between European and American releases, but which has, in recent years, become considerably more tightly synchronized. Released in advance of a handful of US dates in December, 2010, it's a welcome—and overdue—opportunity for North American audiences to experience a group that values silence, subtlety and the elusive over density, blatancy and the obvious.

That's not to say that there aren't periods of intensity throughout this 50-minute set of eight improvisations: "L'Indifference," over the course of eight minutes, ebbs and flows to moments of particular extreme, with Wallumrød's buzzing, prepared piano and Charles' undulating, ululating textures—electronic-sounding, at times, but absolutely not—supported by Zach's near-subliminal pulse and Grydeland's delicately bowed banjo. But what extremes exist amongst these eight spontaneous creations with French titles—reflecting Charles' nationality in this group of otherwise Norwegian musicians—are more about contrast with the overall subdued nature of the music, where subtile gradients rule, rather than manifest dramaturgy.

Those familiar with Grydeland and Zach—members of the more electro-centric collective Huntsville—which continued its exploration of the place where free improv, roots Americana and hypnotic Indian rhythms meet on Ecos, Arches & Eras (Rune Grammofon, 2009)—in addition to cofounding the acutely experimental SOFA label a decade ago—won't be surprised at the degree of restraint they demonstrate here, as both players use a variety of extended techniques and preparations of their instruments to evoke textures beyond the pale. When combined with Wallumrød—who, along with Zach (a member of keyboardist Jon Balke's Batagraf and Magnetic North Orchestra), is Dans les arbres' the only other ECM alum, and whose own albums, including Fabula Suite Lugano (ECM, 2010), have moved increasingly away from overt improvisation, towards an understated kind of interpretation—the music of Dans les arbres leans more heavily towards the influence of contemporary classicism and of folklorism than anything resembling the American jazz tradition.

The wildcard in the group is Charles, who's as likely to be delivering long multiphonics as he is oblique melodies, contributing soaring lines that scream with passion yet refuse to condescend to the obvious. It's all too easy, after all, to improvise with reckless abandon and be about catharsis and almost vulgar expressionism; more difficult, then, to find a place where four voices can meet on egalitarian terms, to create music that ranges from a kind of Zen-like near-silence, to extremes that are greater, to be sure, but never so much so as to jar group's overall transcendental nature. Dark, and only occasionally departing from its introverted nature, Dans les Arbres engages many emotional touchstones, but never in ways that feel forced, coarse or superfluous.